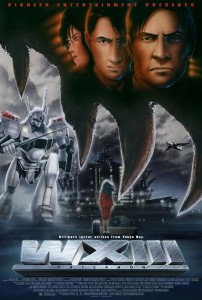 One of the first oddities of the film is that the two detectives have absolutely nothing to do with the regular cast. The old familiar faces only show up for brief cameos. These new guys are in a completely separate department and they don’t even use the signature patlabors. The title mecha only show up briefly for the final showdown, and even then they are used as more of a backdrop to the whole thing. In fact, even though the characters are investigating damaged labors, the regular labors don’t show up much either. They only appear as damaged mechanical thingamajiggers lying around while the detectives ask questions. I don’t think this is necessarily a bad thing, but making a film that has almost none of the identifying traits of the series does make for a rather awkward entry in the series. 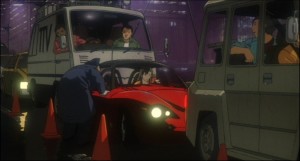 One of the slowest aspects of the film are all the interviews that the detectives do. This is a staple aspect for detective fiction. You’ve got to have some witnesses to interview. The heroes need to find out the information somewhere. But these interviews don’t do that. They’re nothing more than a waste of time. They are carried out over complete silence, and whatever the conversation was, we don’t get to hear it. Oshii himself did this in the first film, but he had a purpose to it. For one thing, the detectives in the first Patlabor film weren’t the focus of the story; they were minor characters working in the background. But more importantly, Oshii used a lot of visual storytelling there. You could tell, if you paid attention, that they were following a chain of clues. In WXIII it is instead clear that these random questions aren’t helping anything. It just features a shot with a detective talking to a random citizen who shakes his head, slowly telling you that nothing was gained, and a whole lot of time got wasted in the process. And the film keeps doing it. It’s like watching a door-to-door salesman going down the street. 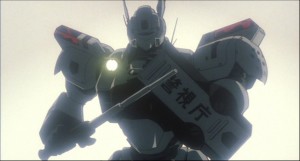 There’s also a whole tangled web of shadowy government agents cutting a deal with an amoral science research company, probably to make a new super-weapon, while a mad scientist uses those resources to create a mindless monster. But none of this gets explored. There’s potential for a huge mystery to solve and then deal with untouchable villains acting from within the government. Instead we get a laundry list of random bystanders who don’t know anything, and we don’t even get to see them characterized since it’s all done in silence.

Nor do the action scenes play a significant role. Even the big climactic showdown feels rather weak, suffering from a severe lack of tension. It doesn’t even seem like a critical part of the story. It certainly doesn’t have much for the main characters to do. They spend the whole fight dealing with the young detective’s new girlfriend-turned-suspect, which is actually the main purpose of the story. Unfortunately, that isn’t dealt with to any greater degree of depth than the various subplots. Their romance is barely touched upon, and you get no feeling that these two have any genuine connection. They certainly didn’t have any chemistry together. Nor does there seem to be much of a team dynamic between the two detectives themselves. It has the bones of a buddy cop relationship between them, but it never tries to develop that relationship, either. 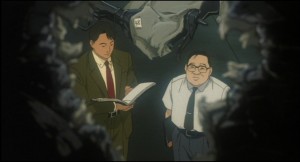 One good thing I can say about the film is that the animation is pretty good. It’s about on par with Patlabor 2. As an early 2000s era film, I came into it expecting and dreading an avalanche of terrible CG effects, and WXIII was blessedly lacking in that factor, sticking to more traditional animation. Unfortunately, the animation is better than the content it is animating. Takayama lacks Oshii’s ability to capture a compelling image, and so even though the technical aspects are great, the film still doesn’t look as good as the earlier films.

I’m afraid this film didn’t renew my faith in the series. It drags way too much, and it’s too disjointed and unfocused to tell the story. Perhaps the best part of the film is the Hollywood director that gets pissed off at the cops when they commandeer his set. But that’s a pretty flimsy bit of entertainment and definitely not worth the price of admission. I didn’t care much for Patlabor 2, but WXIII is sadly a further step down from that one, and even fans of the series won’t find much to enjoy here because it barely features the principle characters of the series at all.