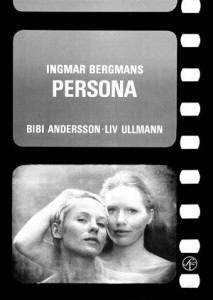 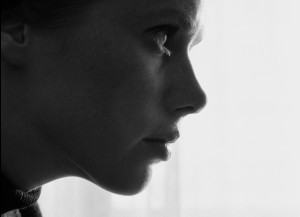 I can’t claim that I know what it is all about, but I do know that the film plays with the idea of reality throughout. The film opens with a series of shots of film projectors and other seemingly unrelated images, ending with a boy in a room with corpses, slowly waving his hand in front of a projection of a woman’s face. Without human contact he seems to be reaching towards the projection for the human connection he desires. His reality is cold and distant, but this “reality” is more surreal symbolism than anything else.

Elizabet is an actress, a profession that trades in fabricated reality. She stops talking after an incident where she is overcome with the urge to laugh on-stage. It’s like the walls in her mind that allowed her to detach from herself to play a role have eroded away. Now all she can see is how ridiculous her job as an actor really is. But in going silent, she also retreats from the other “roles” in her life, namely that of wife and mother. And it is these roles where the deep psychological meat of the film resides. 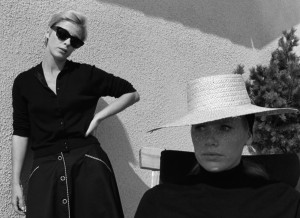 The other side of the film is Alma (Bibi Andersson), the nurse. While at the seaside home, Alma becomes very comfortable with Elizabet’s silence, seeming to interpret it as acceptance and an invitation to share her life story. In a way Elizabet is the silver screen to Alma’s projector, absorbing whatever she projects without reaction. This creates a reality in Alma’s head about the situation, and these varied threads of reality all come together when Alma realizes that things are not necessarily what she has built them up to be.

The truth of what we see in Persona is always in question. As an audience we understand how the cinema works, and with the help of the filmmakers we build the film’s fabricated reality in our heads while experiencing it (like Alma does in her situation). But in Persona, Bergman actively deconstructs the characters’ sense of reality as well as the audiences’. Instead of taking us on a journey, he’s actively working against us, subverting the very idea of film, so that the journey is entirely one of the mind. If that’s not great filmmaking, I don’t know what is.

Persona is part of my 2014 Blind Spot Series where I see one movie a month that I feel I should’ve seen a long time ago. It’s all the brainchild of Ryan McNeil over at The Matinee, one of the web’s premiere film blogs. This month Ryan tackled Goodbye, Mr. Chips, a film I have yet to see myself. Head over there and check out his post, as well as the links to all the other people taking part in the series! And feel free to participate on your own blog as well!