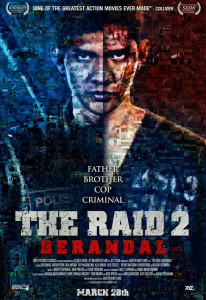 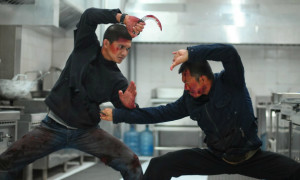 For those familiar with Merantau and The Raid, you’re already aware of the prowess that Iko Uwais and Yayan Ruhian possess. For those that don’t know, in addition to acting and fighting on-screen, this fearsome duo has also done the martial arts choreography for all three of Evans’ films. The Raid 2 introduces us to another Silat master: Cecep Arif Rahman. Even before he fought Iko Uwais, I could tell from his presence that he was an ultimate badass. There was fire in his eyes, and I eagerly awaited its unleashing on our hero. By the end of the film I was not disappointed, and Cecep Arif Rahman has definitely earned his place in the martial arts film hall of fame… in his debut movie!

Now you might be reading all these flowery words about how awesome “this” was and how badass “that” was, and then wonder why there are only 3 stars up top. Here comes the hard part: tearing down a movie I really want to just have a good time with. If The Raid had no story, then The Raid 2 makes up for lost time and includes enough story for two movies. The only thing is that the story isn’t much of a story at all. The plot is all generic “cop going undercover in a gang” bullshit that you’ve seen done better in a ton of other films. But who cares, right? IT’S THE MOTHERFUCKING RAID!!!! ACTION ACTION ACTION!!! Well, when the film is 150 minutes long you do kinda have to worry about these things! 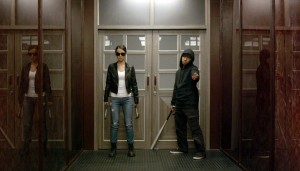 Even if I can forgive the clichéd story (which isn’t too hard for me), it’s almost impossible for me to overlook the film’s fatal flaw: its lack of character depth. Yeah, I know… “IT’S THE MOTHERFUCKING RAID!!!! Character depth? Are you fucking kidding me?” No, unfortunately I’m serious. And when cookie-cutter, obvious, and sometimes flat-out boring characters are combined with a seen-it-all-before story, I was merely left sitting there in the darkened theater waiting for the next action scene to start. Which is no way to watch an 150-minute movie. Perhaps this is a flaw in my brain, which was probably subliminally chanting IT’S THE MOTHERFUCKING RAID!!!! over and over while the film was running, and thus not allowing me to get swallowed up in the plot. Who knows? I guess I’ll just have to watch it again.

Despite all my misgivings and negative feelings while watching The Raid 2, I did end up enjoying it overall. It’s definitely not as good a film as The Raid, but it’s much more ambitious and wide in its scope. Evans never tries to just recreate the tightly contained badass of The Raid, and no matter what that deserves a big ol’ A for effort. I do have to say, though, I was really disappointed that many of the fights in the trailer were actually just short bursts of action in the movie instead of the full-fledged scenes the trailer makes you think they’re going to be. But whatever, The Raid 2 features the reigning champions of screen martial arts (Iko Uwais, Yayan Ruhian, and now Cecep Arif Rahman), so all you fight fiends need to check this one out for yourselves regardless of what I’m saying. (And by this point, a few weeks after release, I’m sure you already have!)