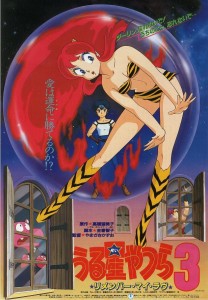 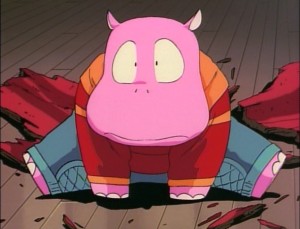 The plot involves a time travel setup, not that it starts dealing with that until the end of the film. But right from the start it jumps from 1967 to 2267, so it’s pretty obvious that some kind of time jumping is going on. The bulk of the film, however takes place in the time the movie was made, 1985, where all the usual Urusei Yatsura characters are going about their lives as usual. When Ataru is cursed to become a hippo, Lum takes off to find the culprit while Ataru lays around and bemoans his situation. The action focuses more heavily on Lum this time, and the rest of the cast is left with more peripheral roles.

It’s hard to describe much else without spoiling the story. But there were plenty of great moments of comedy along with some great moments of surreal mystical confusion. If you’ve been following my reviews for a while now you probably know that I love surrealistic anime, so this film may be skewed to my taste more than normal. At any rate, I certainly enjoyed how it all went about.

The movie also features one hell of an awesome chase scene as Lum chases down the film’s antagonist, twisting through skyscrapers and eventually taking her through a rather trippy scene in a maze of funhouse mirrors. It was not only an engaging action scene I hadn’t expected to see in the series, but it also showcased some great animation for the time period. The visuals are a definite strong point for the film. I was rather surprised to see just how much the movies would maintain a strong style even after Oshii left the scene, but Yamazaki stepped up to the plate and delivered an excellent experience.

If there’s anything I can really fault in this film it is that it feels rather different in tone from the series. This isn’t really a problem as it is basically following the road set out by Oshii in the first two films, but it is leaving me without the relentless silliness that I expect from the series. I keep expecting a laugh around every corner, and it’s just not here. What replaces it is still good, but leaves me feeling rather unfulfilled. I guess the only thing I can do is go back to the TV series and get my giggles from there.