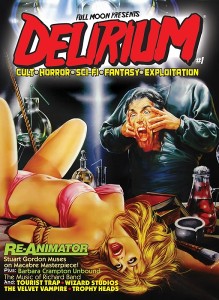 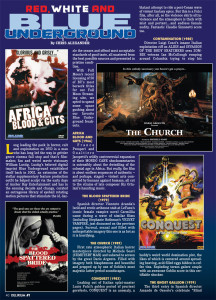 Delirium even betters the old Fangorias by having better quality paper, as well as devoting a couple of whole pages to poster reproductions (Issue #1 contains these for The Velvet Vampire and Tourist Trap), as well as a two-page repro of a Japanese Re-Animator poster at the center of the magazine (to make for easy removal!). Maybe everyone won’t think this is as cool as I do, but I LOVE posters, so this small touch goes a long way in cementing the Delirium reading experience into my heart.

It’s not all about the pictures, though! There’s also a whole mess of interesting articles that seek to flesh out the Full Moon world for those interested. The main focus of issue #1 is Re-Animator so we get a great interview with director Stuart Gordon, as well as shorter pieces with actress Barbara Crampton & composer Richard Band. Other articles shed light on some of the recent developments at Full Moon Streaming, namely the acquisition of 50 titles from Blue Underground and the recent unveiling of the new Wizard Studios for independent filmmakers to submit their films. The first three of these independent Wizard films are showcased in interviews with their directors about the challenges of working within a limited budget and other relevant topics. I wish all the magazine’s interviews went into more depth — or at least the same depth that the Stuart Gordon interview does — but I also realize there are only so many pages!

All this high praise probably sounds like I’m shilling for Full Moon after they sent me a review copy of the magazine, but I can assure you that this isn’t the case. I’m a big time Full Moon fan, going all the way back to my youth. As with pretty much every movie fan my age (32) and older, trips to the video store were mesmerizing, memorable excursions into an oasis that offered portals into a myriad of worlds both explored and unknown. My parents had an aversion to horror and low-budget films, so the VHS tapes put out by Charles Band and Full Moon were always just outside of my reach. But thanks to that friend with the Fangorias that I mentioned earlier, I was able to sneak in a few Full Moon titles such as some of the Puppet Master films and Dollman. I was always interested in seeing “the ones that got away,” and so my review series here (which is my attempt to review every film in the Full Moon catalog) was born in 2010. I love their films and Delirium is a great addition to their lineup, offering nostalgia both in its format and in the films it covers. If you’re a fan, definitely give it a shot.

Delirium is available for purchase at the Full Moon Streaming site, both as single issues ($10 each) or as a 1 year/6 issue subscription ($55). Issue #1 has been on sale for a while, and Issue #2, featuring Tombs of the Blind Dead on the cover, was just put up for purchase earlier this week! Get ’em while they’re hot!

Disclosure: Full Moon provided me with a review copy of Delirium #1.