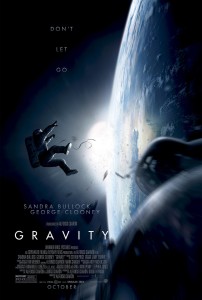 Expectations: High. Everyone loved this, right?

On the technical side of things, Gravity is an absolutely amazing motion picture. It made me want to love the movie, but unfortunately movies do not succeed on their technical prowess alone. The emotional side of Gravity is a weak link, trading on stereotypical clichés and crafting moments too obviously designed to get a “deep” emotional reaction. This is not just Gravity‘s fault, though, as it’s more of a systemic disease afflicting a good majority of Hollywood mainstream films. But because of the technical mastery on display (especially the film’s 13-minute opening tracking shot), it felt right to hold Gravity to a different standard. Clearly, that didn’t entirely work out.

Sandra Bullock and George Clooney play American astronauts performing system upgrades on the Hubble telescope. For some reason, the Russians blast a satellite with a rocket, starting a chain reaction of space debris that not only jeopardizes the American mission, but their lives. Sounds like the plot of an ’80s movie looking to reinforce Cold War ideals, but I assure you it just came out last year!

In addition to my problem with the cloying emotional base of Gravity, there are some serious issues of logic plaguing the film. Let me preface my issues with this: I’m no scientist and I don’t work at NASA, so I have no idea what would be a good or bad thing to do in a perilous situation in space. But I feel pretty confident in saying that when your suit’s oxygen level is reading 2%, you don’t continue making small talk. I know talking about mundane things can have something of a calming effect in a stressful situation (and Sandra Bullock was definitely breathing heavily and wasting oxygen), but talking is only speeding up the process, no?

I also had a hard time buying the fact that they’d let Sandra Bullock’s character into space. Even when the film is just beginning and everything is going according to plan, she’s already high-strung and nervous. When the shit hits the fan, it only gets worse. This I don’t mind too much; if I was in that situation I’d be losing my shit too. But NASA isn’t supposed to send just anyone up into space and out on a spacewalk are they? Bullock is the everywoman in space, and it seems really farfetched. These people are supposed to be astronaut quality — scientists and professionals who have trained many years for this moment. This is the same argument that many hurled at Prometheus; the difference here being that Gravity is trying its best to be realistic, while Prometheus was always going for pure and total fantasy (with a philosophical bent). There’s also the element that my girlfriend noticed where Clooney, the cocky, red-blooded, American male, is cool and calm compared to Bullock’s frenetic, emotional female. Would it kill Hollywood to reverse some roles once in a while?

But honestly, despite these issues that made the second half of Gravity far less than it could have been, the film is pretty good entertainment. It’s such a technical tour de force of incredible FX work and amazing visuals, that I’d say anyone that loves film should probably see it. Oh, but before you get your expectations up and slip into that spacesuit, it should be known that Gravity is not science fiction, hard, soft or otherwise. See Europa Report for that. No, Gravity is a straight-up Hollywood drama/thriller that happens to be set in space, and nothing more.