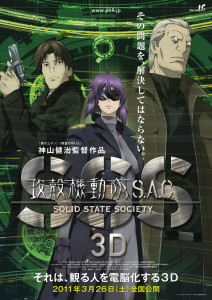 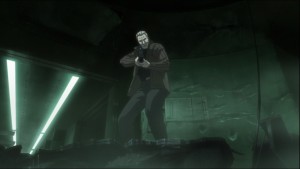 This film takes place several years after Individual Eleven, and it may even finally take place after the original Ghost in the Shell. If you wanted to merge the two films with the Stand Alone series you could look at Individual Eleven as a setup for the first film, introducing the philosophical concepts and the psychological stress that drove Major Kusanagi’s actions in the first film. This film would then take place after Innocence. It doesn’t quite work that way, though, as there are some discrepancies that don’t carry over well — such as the tachikoma AIs — but it’s hard to resist the temptation of blending the two stories together into one consistent tale, especially when they don’t specifically contradict each other.

In Solid State Society, Kusanagi has resigned from the force, and no one knows where she went. But as Batou is investigating a new case around the Puppeteer, an expert hacker setting up assassinations, he runs into Kusanagi once again. She tells him to back off and watch out for the Solid State Society, whoever they are. Since we all know how well cryptic warnings work at keeping main characters out of trouble, Batou keeps digging up clues and finds evidence that Kusanagi herself might be the Puppeteer. And just because all that was way too simple for a Ghost in the Shell story, Section Nine finds a bunch of kidnapped children whose memories have been hacked for reasons unknown, leaving their actual parents a mystery all its own.

As with all the films in this series, there’s a lot to think about, and keeping up with it all feels like a full-time job. By the end of it, it seems like there is no way all the threads could ever be tied up. But then they are suddenly slipped into an elegant little conclusion that does exactly that. It’s a great example of just how important the ending is to a story. I was about ready to write this one off as an overly complicated mess until that final explanation came along and answered just about all of my questions in one neat package of motive, method, and philosophical musing that carried echoes of the first film’s questions about the definition of life. On top of that, it leaves things with one of the most confusing jumble of moral conundrums I have ever seen in a work of fiction. And that’s a good thing in my book. 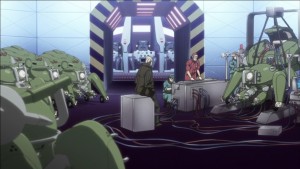 So it’s got the intellectual side nailed, but what about all that cool action? Never fear, it’s got that part covered just as well. The tachikomas return for an awesome shootout with some cyborgs; there’s some stealthy bad guy tracking; and it has a cool sniper showdown across skyscraper rooftops. The only thing it’s missing is a cool martial arts scene. I admit that is kinda disappointing, but it’s certainly not enough to hurt the film at all.

I must say I’m impressed with Solid State Society, and I have to rank it just behind the original Ghost in the Shell, losing out only in the animation department. It seemed like it was trying to do too much, but that ending really got me behind this one. Put on your thinking cap before diving into this one, but definitely do dive into it. It’s a must see for any serious Ghost in the Shell fan.