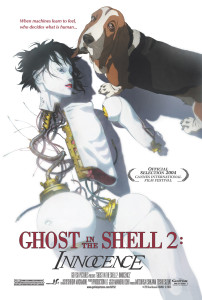 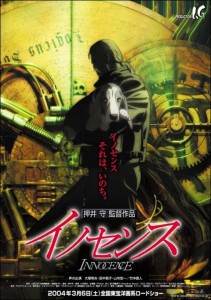 What also kept sticking out at me visually were the designs for the robots. In the first film, all the cyborg parts were shown as replicas of human organs. Muscles and bones were made with the same structure as human anatomy, thus the end result looked human. Here, however, the robots are designed with a ball and socket joint structure that seemed vastly different from before. It took me a while to come to terms with it. It eventually dawned on me that the film was all about dolls, and the obviously mechanical designs fit nicely with the themes about lifeless puppets that dominate this film rather than the themes of life and humanity without a human body that the original film focused on.

Oshii’s style is still on display here, but like the first film he keeps the introspective wandering short enough to avoid dragging the film down. Unfortunately, while the animation in the first film was so good that I could watch those small scenes with awe and admiration, the CG in this film just ruins the effect. The film also seems to take itself a little too seriously as a work of art. Maybe it was just the CG knocking me out of its spell, but I felt like all the artsy-fartsy dramatic shots were getting a bit pretentious. It still has plenty of fun action sequences, but the balance of highbrow and lowbrow content seems off kilter this time around. 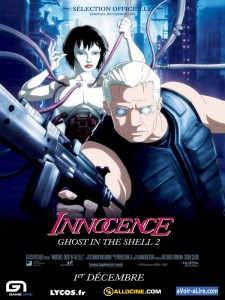 One of Oshii’s favorite artsy bits is the basset hound. He’s well-known for sneaking them into nearly every film he’s ever made. This time, it passes the point of silly Easter egg, and becomes outright distracting. It’s front and center for a good deal of the film. Fortunately, it actually has a role to play in the plot, albeit a small one, so it’s not just a worthless time waster. I still could have done with a lot less canine admiring, though.

I think Oshii was trying a bit too hard to live up to the bar he set so high in the first film, and Innocence feels a bit overwrought because of it. The plot suffers from it as well. Towards the end there is a bit of a mindfuck scene, and I lost track of what was happening. Perhaps seeing it again would give me the opportunity to better understand what was going on in the final act, but for this first time viewing I was left confused at the end.

Even though I didn’t really know what was going on all the time, the action was still fun enough to hold the film together. They’re missing all the invisibility camouflage that was so pervasive in the first Ghost in the Shell, but it still has plenty of good old fashioned shoot outs and some entertaining hand-to-hand scenes that kept me awake through the bad CG and convoluted existential quandaries.

I didn’t love this film, but a lot of the my trouble comprehending it might be cleared up on a re-watch. The big problem is that with all the CG I’m not sure I really want to give it another shot. If you liked the first film and you don’t mind decade-old CG effects in your anime, you’ll probably have a merry old time. But while I could enjoy some parts of it, I have far less enthusiasm for Ghost in the Shell 2 than I did for part 1.