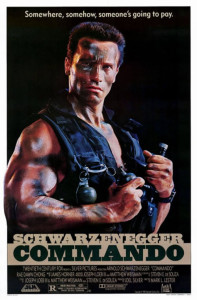 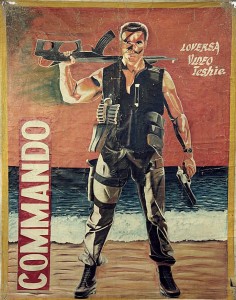 But Commando does not open on this triumphant note. Instead, we start off with the villains. At first, we’re unaware that they are even villains. Disguised as trash men, dudes with Uzis viciously murder a homeowner who thought he was about to miss trash day. They were there to take out the garbage, alright… and the garbage was him! Similar scenes of random people getting murdered follow this, and as an audience we’re left wondering what it all adds up to. The only thing we know is that these bastards are capable of some serious shit and they are not to be trifled with.

And who might be able to take on criminals of this caliber? Only the type of guy that cuts down a huge tree with a chainsaw and then carries the whole damn thing home on his shoulder! Enter John Matrix, an ex-military man looking for a bit of peace and quiet to raise his daughter. Of course, it’s all about to be shattered, and because this is the ’80s that takes about five minutes.

The action in this movie is incredible. It’s pure, ridiculous fun. This is exactly the kind of stuff that would NEVER fly in a modern film, and that’s exactly why modern films don’t satisfy my every cinematic urge. It’s funny that with the level of ridiculous bullshit that CG has pumped into the action genre, the more realistic ridiculous bullshit of the ’80s is somehow “more bullshit” than far less realistic ridiculous CG bullshit to the modern viewer. But I’m not here to talk about CG. In fact, I remember hearing a story about a memo from the producers to Arnold and director Mark Lester about trying out some rudimentary CG in Commando, but Arnold put all the computers inside the villain’s compound buildings right before he blew them to smithereens (and thus Arnold saved the true action film genre for another decade). 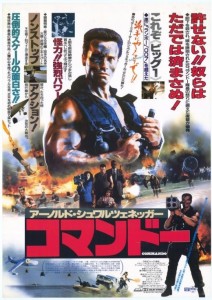 But while Arnold and his barrage of explosions and one-liners always get major credit for making Commando awesome, I need to point out an unsung hero that is equally responsible for the film’s perfection: James Horner. His incredible score has captured my imagination since childhood and it perfectly complements the action-packed visuals. Over the years I’ve seen reviews lambast Horner’s score and reading them made me want to fly an amphibious plane to the reviewers’ island compound so I could beat the greatness of Horner’s steel drum and sax-filled score into their heads. And this is not just one of the best Arnold film scores, this is one of the greatest action film scores of all time.

So yeah, I love Commando. It’s one of Arnold’s best movies in my opinion, and seen in chronological order it’s also interesting to note it as the first “normal” role for him. In every previous film that he starred in, Arnold played some version of an emotionless killing machine, but right up-front in the opening credits of Commando we get to see Arnold’s humanity as he is smiling, laughing and just being a father. It’s a stark contrast to his previous roles, but I’m sure this helped to pave the way for Arnold to take on a wide range of roles instead of just the hulking killer guys. Of course, he is the ultimate hulking killer in Commando, but he’s doing it for his daughter so we can all relate. I mean, who wouldn’t put camo war paint all over their bodies and mercilessly slaughter hundreds of dudes to get your kid back?

If you don’t like Commando, I don’t know if we can be friends. I mean, if you can’t extract joy from a flick this criminally good, then I’m going to have to assume you also get no happiness from other undeniably great things like sunsets, birthday cake and popping bubble wrap. So if you haven’t seen Commando, strap in and have a blast!

Next up in this chronological journey through the films of Arnold Schwarzenegger is Raw Deal, a film I don’t remember much about because I’ve only seen it a couple times. But Arnold vs. the Mob? Can’t wait to revisit it. See ya then!