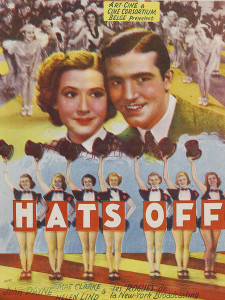 Hats Off was on my schedule for one reason: Sam Fuller. This film has the first on-screen credit for Fuller (sharing story & screenplay with Edmund Joseph) and considering its press-focused narrative, I’m not surprised. But Fuller’s memoir reveals that his original screenplay was quite a bit different. The film was originally to have opened in the prehistoric age, showing how these two battling cities had been battling since the dawn of man. There were apparently also a lot of political aspects to the story, which Fuller notes were cut in the interest of simply making an absurd comedy. This is what I find most interesting about Fuller’s involvement on Hats Off. He was commissioned to write an absurd comedy and according to him he delivered one that also skewered man’s inability to change. Even in his youth — Fuller was only 24 at this time — he was the ballsy character his fans have come to love. His desire to expose the inherent flaws in man and society filled his mind even then.

But honestly, Hats Off just doesn’t seem like the right venue for that type of Fuller thinking. It’s a comedy after all, and while filming it as written by Fuller may have made for a better film (who knows?), at the end of the day it was supposed to be a musical comedy. Very few people go into a musical comedy looking to be dragged through the muck of society. The only problem is that by keeping the story while excising Fuller’s intent, Hats Off feels incredibly incomplete and threadbare. The story, especially the romance, is paper-thin at best, and at times musical numbers are strung together with the smallest bit of plot possible.

Beyond the Fuller connection, what’s interesting about Hats Off is that it is essentially a low-budget film from an upstart studio. Grand National Pictures came into being in 1936 and by 1939 they were defunct. For me, this added a layer to the Hats Off onion, as I considered other films of the era from major studios. Chaplin released Modern Times the same year, and movies like Gone With the Wind and The Wizard of Oz were only a couple of years later. Hats Off is definitely much further down the budget totem pole, but in spite of this it still packs in a lot of great, well-designed sets. In general Hollywood standards, this is pretty far from being well-produced, but under the banner of an independent, low-budget film it is most definitely well-produced and quite impressive.

What’s not all that impressive, though, is Hats Off as a whole. It’s not terrible, it’s not great, it just is. If you enjoy 1930s song and dance numbers then you’ll find a few to enjoy here, but you’d probably be better off just watching something better from the era. It is notable for the Sam Fuller connection, but all but the most die-hard Fuller fans could easily avoid this one and not lose any sleep over it.

Hats Off is in the public domain, so here’s the whole shebang!