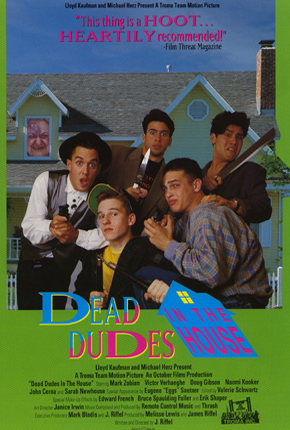 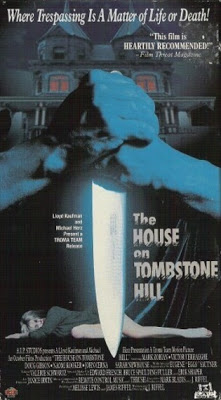 What matters is that the line in the sand between them makes for some fun interactions before any of the real horror begins. My favorite dude was the total dickhead carpenter, not because I identified with him, but because he said the dumbest, funniest shit of them all and I like dumb, funny shit. The bickering ultimately doesn’t amount to any real payoff for the film, but it keeps the atmosphere grounded and fun while director James Riffel slowly introduces elements of the supernatural.

These elements are very well-realized, and the villain is a great character. What I love about horror films is that as long as the filmmaker successfully sets the scene, virtually anyone or anything can be an effective horror movie villain, even someone as unsuspecting as the main villain seen in Dead Dudes in the House. This unique take on the villain is memorable, as well as equal amounts creepy, sinister and haunting.

And let’s not forget cheesy. As much as I hate using the word “cheese” to describe aspects of films, it’s hard to get around the way many low-budget films have to do certain things. They simply don’t have the money to make it look great, and even the best low-budget work (like say, The Evil Dead) will eventually look fake and cheesy to some cocky viewer from the future. So while I say that the villain is cheesy looking, know that I loved every minute they were on-screen and I wouldn’t have changed a thing. I just know that if I don’t mention this, someone will read the review and tell me how the movie is dumb and the villain is “cheesy.” So just doing a preemptive strike there.

Besides, it’s hard to focus on calling the villain’s FX “cheesy” when the film’s overall FX work is so much fun. There are definitely moments cut around the gore to avoid having to do more FX work, but these compromises also increase the quality and the budget on the FX work they did have. And it all looks great, especially considering the amount of money this was probably made for. There’s even some light animatronics work going on in a couple of severed limbs, which I thought was especially impressive for a film of this budget. I suppose it could have been a dude pulling a fishing line or something, but the movement definitely looked robotic. 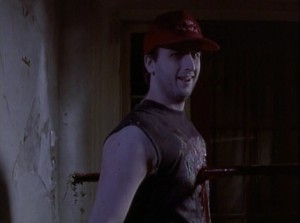 Riffel’s direction is also quite spry and exciting for a first feature. Certain moments owe a bit to the success of Evil Dead (snap zooms and other Raimi-esque stuff), but Riffel does a good job of making the techniques his own. And to focus on these moments is wrong, as they are mere punctuation on the film which overall carries a more reserved, almost ’70s horror vibe. I was especially impressed with the amount of scenes shot in one long, extended take. The opening scene is a perfect example of this, starting on a striking image of a 20-something woman drinking a beverage through a straw. Someone walks in front of the camera holding a long blade, and the image slowly zooms out to reveal the entire room, and the groundwork for the film to follow. Tightly constructed low-budget cinema like this is a rare thing.

But through all my love for Dead Dudes in the House (and that’s the movie, not actual dead dudes in a house :)) its relatively storyless narrative does get tiresome towards the end. There’s only so many deaths scenes in a row that I can take without wanting a breather, even when all the death scenes themselves are fun and entertaining. So it does all kind of run together and seem longer than it actually is by the end. But don’t let that stop you from watching this fantastic low-budget gem.

The whole movie officially available on YouTube for free, thanks to the kindness of Troma!