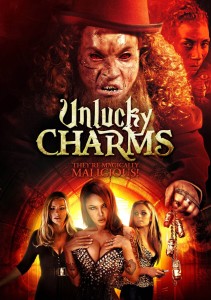 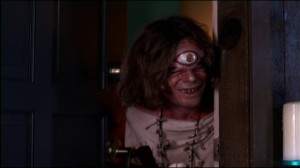 Yes, it is, and the following scene will snap you out of whatever shock the rather thoughtful opening might have caused. We find ourselves inside a large house built to resemble a castle in Los Angeles, and five girls in lingerie walk down the spiral staircase for their reality show judging lineup. Castles and scantily clad women? Oh yeah, that sounds more like the Charles Band I know! But actually the earlier thoughtfulness is a big reason why I enjoyed Unlucky Charms as much as I did, as it contributes a lot more to think about and ponder than the average modern Full Moon film. Hopefully it signals more interesting films on the way from the company, though I won’t hold my breath for Ooga Booga 2: Electric Boogaloo (yes, that’s the actual title, as voted by fans) to hold up that end of the bargain.

In any case, Unlucky Charms actually make me think about a couple of things. Perhaps this wasn’t the intended response — I’m sure I’m supposed to just have fun — but with the film’s reality TV show setting, I couldn’t help but think about how the reality show has taken over TV in such an all-encompassing way. There’s no effort made in Unlucky Charms to show what the film’s reality show would actually have looked like on TV, so what’s in the film feels somewhat flat. No matter how much you like or dislike reality TV, at this point everyone is aware of it and knows what it looks like. And Unlucky Charms never looks like it; it always looks like a movie. 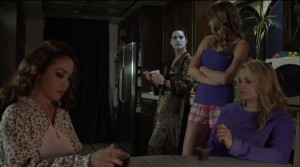 So my thinking based on these ideas was that this film represents the raw footage for the show instead of an actual representation of it. Any raw, unedited reality footage is going to be strange and largely boring; these shows are the products of massive amounts of impressive editing, culling a slam-bang, exciting, funny, roller-coaster 45-minute show from 100s of hours of footage. So, perhaps unintentionally, Band has created in Unlucky Charms both a testament to the incredible editing work being done on reality TV and a hearty “Fuck You” lampooning of the overly dramatic medium in the same breath.

Of course, the acting could be better in spots, and a good portion of the dialogue is overwritten and sounds nothing like how people actually talk. In another movie I might care about such things, and if I’m being critical I’d definitely like Full Moon to step up their game in this regard. But I can’t deny that Unlucky Charms does reach further and deliver something a little closer to the Full Moon heyday than other modern Full Moon releases. It’s still firmly in that B-Movie corner that scant few mainstream filmgoers would ever care to visit, but for the fan of the weird, strange little movies that inhabit the cracks in the walls, this is a fun one.

Next time on Full Moon Tuesday, I’ll be checking out the classic ’80s film, Sorority Babes in the Slimeball Bowl-O-Rama! See ya then!