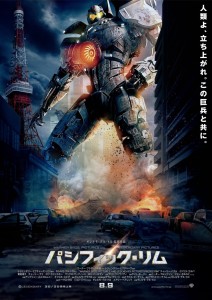 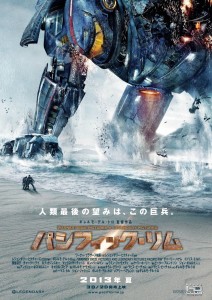 A non-stop parade of fun production design, Pacific Rim is exceptionally well-designed. I will always nerd out on any movie that puts forth incredible looking future tech, and the computer screens and technical readouts of Pacific Rim are a thing of beauty. The film’s world doesn’t exactly feel real — it’s much too exaggerated and color saturated to be our world — but it does feel cohesive and engaging. The pilot suits and the robots’ mechanical cockpits are the standouts, with a perfect balance between future sheen and distressed, paint-flaked usage. My only real complaint in the design department is that beyond the humans yelling out what category the current kaiju was, they all looked about the same size to me. So when we’re supposed to be saying, “Oh shit! Look at the size of that thing!,” we’re left confused due to the haze of battle. This is an unfortunate side effect of setting 99% of the film at night and in the rain (presumably because “It looks more awesome”).

I’ve always thought that del Toro’s image composition left a lot to be desired — and Pacific Rim is no different — but Pacific Rim is the first del Toro film to transcend my artistic hang-ups and come out on top. This doesn’t mean that I don’t think it couldn’t have been better, but that I didn’t care much in this case. Yes, much of the film is CG and the details of the battles are hard to follow at times, but you never lose sight of the big picture. The robot is powering up his elbow rocket, the kaiju is spitting acid. The editing and the framing regularly obscure aspects of these kinds of specifics, but it’s never quite enough to completely lose track of everything. And besides, too much awesome isn’t good for your health, so they had to obscure something. I do have to say, though, that there are quite a few impressive shots sprinkled throughout the film, I just wish there were more.

But none of this should enter your brain while watching Pacific Rim, because it’s just a whole lot of awesome fun. Sure, it’s yet another infantilized mainstream film for “everyone,” but that doesn’t change the fact that it’s incredulous, ridiculous, unbelievable fun. And awesome, don’t forget awesome. I actually felt taller after watching the movie, that’s how enjoyable it was for that 10-year-old kid inside me. Of course, not everyone will be able to push aside their problems with the film — let’s face it, not everyone has a little kid still kicking inside their soul — but it would seem that they would be missing the point entirely if they don’t. Pacific Rim is definitely standing on the shoulders of giants, with inspiration taken from everything from Godzilla to Robot Jox, but it’s bound to create a whole new generation of kaiju fans and I welcome the recently green-lit sequel.