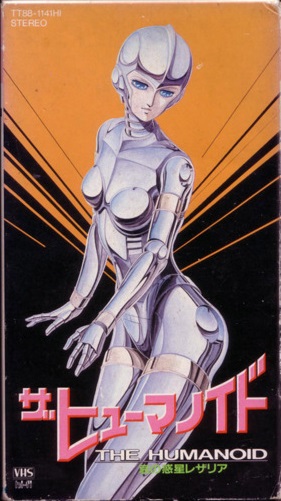 The story, as explained by the Star Wars rip-off text crawl, is about some princess with gargantuan eyes residing in exile and the weird political power struggle revolving around her. In fact, this has nothing much to do with anything, and we instead find the main plot to revolve around a guy named Eric who works on a coffee transport ship. His latest route has taken him to the planet his sweetheart Sheri lives on, and he’s looking forward to some R&R. Sheri’s dad is a scientist that built Antoinette to take care of his luxurious home while he sits on top of pillars and talks to elderly statesmen.

After getting shot down by mysterious aircraft, Eric and his boss hike halfway through a jungle to get to Sheri’s place, and then they get in a water fight with Antoinette. What else would you do with a maid robot while out on a date? There’s also some generic villain who wants to take over the world, and the whole power struggle ends in a manner that I can only describe as unsatisfying. The climax’s only redeeming aspect is the cheesy rock montage when Antoinette finally ditches that jumpsuit during the one moment of the film to actually feature good animation. To be fair, the film actually has some pretty nice music if you’re into ’80s power ballads, and the rock montages are the best parts.

There’s supposed to be some kind of emotional development to Antoinette, but we have no emotional attachment to her, so her feelings don’t hold any meaning. Instead, it feels forced and artificial. Perhaps the main problem with The Humanoid is that it is too short. 45 minutes isn’t enough time to start caring about any of the characters, so the whole story falls into cheesy melodrama. But who am I kidding, there’s not enough quality in this production. A longer runtime would just add more odd coffee references and goofy plot devices while leaving me just as unimpressed.

On the other hand that might actually be fun. The Humanoid has a lot of dumb stuff, but it’s the kind of dumb that’s easy to laugh at. It’s far from good, but at least it’s not boring. So while it’s hard to recommend, if you think stupid B-movies are funny then you might get your fair share of fun out of this title. Bonus points if you dig ’80s music. Just be sure to bring a cup of joe for the ambiance.