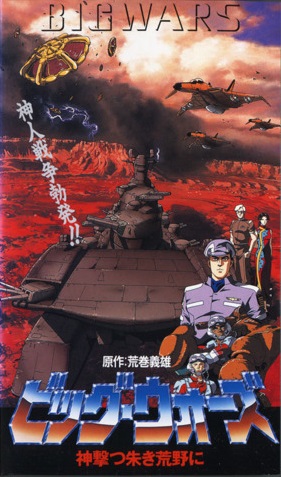 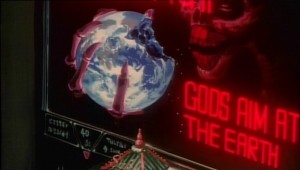 The story itself is pretty standard alien invasion fare. Nothing here is going to surprise you, but I like the atmosphere of Big Wars, and that goes a long way in a genre film like this. It’s the background details that make this movie interesting, the paranoia-inducing propaganda posters and the whirling red dust storms of Mars. The gigantic tanks that resemble naval cruisers are pretty awesome, as are the flying saucer ships the aliens use.

The aliens call themselves gods. When you combine this with the Martian setting filled with location names taken from mythology, it creates a strange mixture of spirituality and science fiction. These aliens claim to have created humanity, and intended for humans to remain on Earth. The humans have violated a divine order and moved beyond their place, so the aliens are here to put us back where we belong. I love the reasoning here. It’s a weird take on the whole “conquering the world” deal, and carries some very creepy implications. I do wish the film delved into those implications rather than just using them to add flavor to the story, but it’s still cool either way. 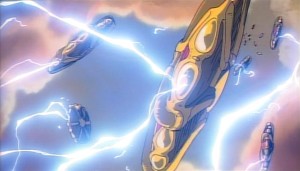 There’s a more psychological focus here as well. While there are plenty of action scenes and fun shootouts, creepy visions begin springing up in the latter half of the film, adding a horror element to the events. Those “gods” can brainwash people, and they cause freaky hallucinations in order to facilitate the process. This adds a good amount of depth to the film keeping it from getting too stale as the story continues, but just like the concept of gods as aliens, it could have gone further and made a richer experience.

None of those light elements are really flaws, though. Nor is my slight disappointment in the animation. It’s actually animated perfectly fine. Certainly well above average. It’s just that the opening dogfight is the best animated scene of the film, which gave me some false expectations of how good the rest of it would be. 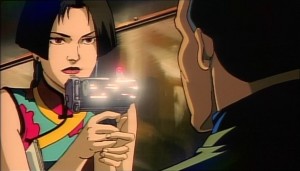 The only real problem I had with the film is its jerky scene transitions. Often whenever it cuts to a new location, I felt disjointed in time. Now that I look back at it, I think most of the film was in clear chronological order. But while I was watching it, I constantly thought it had switched to a flashback, or had jumped ahead much farther than it did. Something about the editing just left me in a state of perpetual disorientation. It’s nowhere near enough to ruin the film, and in retrospect it may have been a deliberate way to emphasize the creepy hallucinations.  It was still a bit irritating at the time, though.

Big Wars gave me a few disappointments, but taking it as a whole, I have to say it’s a solid movie that anyone who likes alien invasion scenarios will enjoy. Its main downside is that it doesn’t go quite far enough with its great ideas. But those ideas are still there and they go a long way to elevating this above the level of just another action flick, even though that’s really at the core of the film. But it’s an action flick that has enough individuality and creativity to make it stand out from the crowd.