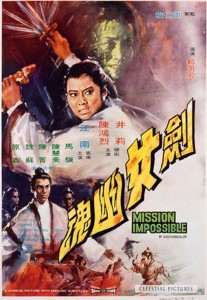 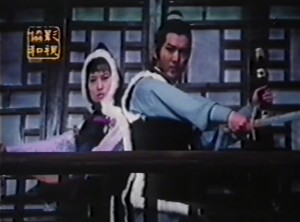 While initially telling a confusing and convoluted story (thanks in part to the horribly translated subs that were only about 75% visible), Mission Impossible is basically a very straightforward tale. The Golden Dragon sword has been stolen, and this is not a good thing for the land. The sword has magical powers and must not fall into enemy hands. Through some quick dialogue we learn the culprit, and that an old hero has taken possession of the sword. Soon after, the sword is entrusted to the hero’s daughter and her mission is to transport the sword back to its place at the palace. Which is kind of impossible, as every devious villain and crazy bandit in the land is out on the hunt for the sword, ambushing our hero Miss Fog (Ching Li)  relentlessly.

And when I say relentlessly, I mean it. The assault on Miss Fog is constant. They titled the film perfectly because it seems absolutely impossible for a single person to make it through the gauntlet of opponents that Miss Fog must contend with, even considering that wuxia heroes can generally lay waste to all comers. These plentiful fights are rather well-done, too, creating a good, rollicking action film once it gets going. The fights aren’t all simple road encounters either, with one fight occurring on a boat at night and another at the base of a huge cliff (perhaps the same cliff seen in Joseph Kuo Nan-Hong’s later 1971 film The Mighty One) where Miss Fog shows off her jumping skill by jumping from one attacker’s shoulders to the next. The villains are a varied group too, pulling a lot of supernatural elements into the mix, with most of them also featuring fantastic wuxia names such as the Five Monsters of May Hill, Earth’s Nemesis, Fast Runner, Ghost Chief and Hades Gatekeeper.

But perhaps the most interesting thing about Mission Impossible is contained in the final 30 minutes. Most of the narrative has already been wrapped up at this point, so it seemed odd that there was still so much time remaining. A good chunk of it, like any Shaw Brothers martial arts film, is devoted to finally vanquishing the leader of the villains. But the methods used here are unique and impressive. I’ve seen a lot of villains run-through with a sword, or taken down with a lengthy struggle of physical strength and agility. Never once have I seen a martial arts film end with the villain being beaten down and mercilessly defeated through psychological means, and it’s pretty damn entertaining to watch. The film transcends martial arts and becomes something of a romantic costume horror film for its final act, and it is this facet that makes the film notable. It would greatly benefit from Celestial’s remastering too, so it’s a real shame that this one will most likely never receive that treatment.

Mission Impossible is ultimately one for the hardcore Shaw fans, though, mostly because of the quality of the print available but also because there are many other better films out there for the more casual fan. But if you are a fan that’s in too deep, and you enjoy a dollop of supernatural horror in your wuxia, definitely give this one a spin.

Next up in this chronological jaunt through the Shaw Brothers Martial Arts catalog: there’s one more rare 1971 movie to do before I close out this phase of the Shaw series and post another Top 10 list, and it’s Shadow Girl from director San Kei! See ya next week!