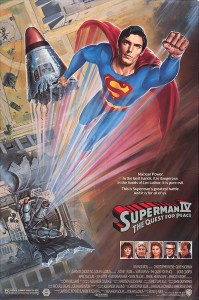 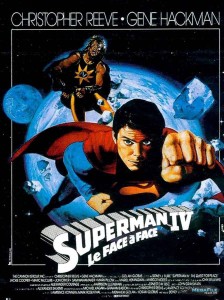 But to put aside the B-Movie thrills for a second, I want to discuss how Superman IV does a fantastic job of bringing the series back to its roots. Where Supergirl completely went off the rails, and Superman III went full slapstick, Superman IV actually attempts to have something of a similar tone to the Donner films. It’s a very campy B-Movie version of that tone, but it’s much more reserved and respectful of the original two films than any of the other sequels. There’s a lot of little touches, too. Bringing Clark back to the Kent farm (which looked remarkably similar to the location in Superman), recreating the Daily Planet sets strikingly well, the return of Lex Luthor and Gene Hackman, involving Lois Lane again and skillfully acknowledging their past relationship long-forgotten by Lois due to magic kiss; all of these aspects do a fantastic job of making Superman IV feel like a worthy and respectful sequel to the legacy Donner created.

Where this begins to fall apart is that with only 85 minutes to tell its story (and an original cut over two hours), Superman IV‘s story is a bit choppy. This holds it back considerably from being the movie it could have been, although I would argue that for this particular film, the shorter cut is better. Why? Because for all intents and purposes, Superman IV is a B-Movie. It was produced by Cannon Films, masters of the B-movie craft. I had no idea that they had made the film until just a couple of weeks before watching it, and I gotta say it lives up to the personal hype that this knowledge built up inside me. Cannon is a name synonymous with entertainment, having created some of the greatest low-budget action films of all time, and — for me — Superman IV is pure entertainment. 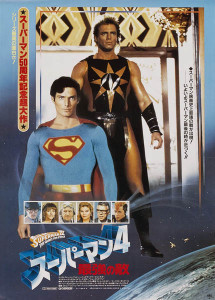 Every time the Nuclear Man is on-screen he’s bathed in orange ’80s electricity! And most of the time he’s yelling like a primal savage and making something explode! He has long fingernails that extend! The list goes on… While some of the film’s first half is slow at times, the arrival of Nuclear Man brings with it nothing but entertainment. But as much as I enjoyed the sprinkles of Nuclear Man throughout the film, they are nothing compared to his finale battle around the world with Superman. Dialogue falls by the wayside and is replaced by non-stop visual entertainment. I can’t even begin to tell you how many times I was howling with laughter at how badass the on-screen fight was. Sure, it’s all very campy, but this is a comic book movie, so as long as you buy into the fantasy of what’s occurring on-screen, it’s a goldmine of entertainment. I realize that many are unable to look past the smaller budget of the film, as it creates moments that may take you out of it, but I wish you could see it through my eyes because this fight is ridiculously entertaining if you just roll with it.

As I mentioned in my previous Superman reviews, I saw this one a lot when I was growing up. But I want to make it clear that this viewing was in no way informed by those experiences. I didn’t remember much of anything about the film, only vaguely recognizing certain scenes (like the nuclear weapons being thrown into the sun). So this love and pure enjoyment is free of nostalgia. I often find that the only difference between big-budget summer blockbusters and B-Movies is their budget, and Superman IV is a great example of this. If this had the same budget as the first movie, I’m positive that people would’ve been much more accepting of it. I’m sure there would still be detractors citing the nuclear disarmament storyline as being preachy, and thus dismissing the film. But whatever… their loss.

Superman IV is campy while also being respectful of the previous legacy, and it largely avoids the slapstick comedy that plagues Superman III. I really don’t understand why this one has such a bad reputation; Superman IV is a hoot.