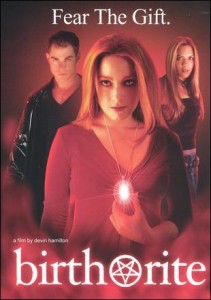 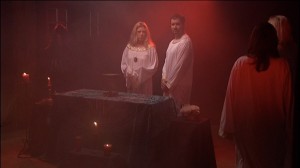 So Birth Rite opens with those suburban witches and warlocks in their garage performing some ritual around a six-year-old girl on an altar. Two witch-hunting crusaders happen to be outside peering in their window, and what’s a good witch hunter to do in this situation? Bust in and start blasting, that’s what! I love that these guys aren’t explained in any way at all; they’re just a few guys in leather jackets looking to cut down on the witchcraft in their area. In the aftermath of the witch massacre, the little girl remains, so one of the witch hunters takes her in as his own. Twelve years later, the girl turns 18, and she quickly learns of the birth rite that was stolen from her that night!

If you got some enjoyment out of that description, then you’ll enjoy Birth Rite. It’s a movie with limited appeal, but B-Movie fans will find a lot to like here. It might not be trashy enough for some, but it has a surprising number of gory moments, and it helps that many of them look pretty good. They’re still low-budget for sure, but they work well for the film and if you’re watching a movie like this you should be well aware of what you’re getting yourself into.

On top of all the fun witchcraft throughout, the film ends in the most spectacularly unexpected way possible (for me): an amateur martial arts fight around a tennis court. It even reminded me of Rumble in the Bronx at one point! No lie! You haven’t lived until you’ve seen a hunky warlock battle the mortal sister of the most powerful witch on Earth by jumping over tennis nets and flipping off of walls. On top of that, the fight was obviously done by a couple of stunt people to make it look more realistic, and in one shot where the stunt man’s face is clearly visible they just did a Cops and blurred it out. It’s hilarious! 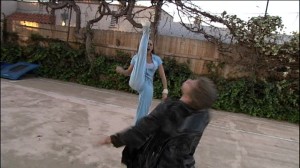 But beyond whatever flaws might be obvious, I actually found Birth Rite to be a fairly well-made low-budget film. A lot of the camerawork could be better, and the editing within conversations wasn’t ideal, but other than that it’s well-shot and has some really nice cinematography, especially for this era in Full Moon’s history. I’m a sucker for scenes bathed in color, and there’s a couple of really outstanding looking scenes of red that pop as good as any Hollywood feature. Birth Rite doesn’t look like some kids got their mom’s Handycam and went out to shoot a movie (like Demonicus or Stitches), it looks like an actual, knowledgeable crew took the time to adjust lights and white balances and do the things necessary to make it look like a real movie. That could just be due to a jump in the quality of affordable camera equipment, but I like to believe it was more deliberate than that. This was director Devin Hamilton’s third (and final) feature for Full Moon, but if the previous two (Bleed & Delta Delta Die) are anywhere near as well-shot and fun as this one, I’ll be in for a treat.

I loved the low-budget witchcraft of Birth Rite, and the martial arts ending was a total cherry on top. The writing is also of a higher quality than your average low-budget film, making this one of the best written Full Moon films I’ve seen from the 2000s. Instead of meandering about, it has an actual plot! And one that’s not especially boring, either! Imagine that. So if you dig on garage practitioners of witchcraft, or angst-ridden teens getting dark powers to control those around them, then look no further than Birth Rite.

Next week there won’t be a Full Moon Tuesday! *Gasp!* I know, I know, this series is never going to end… Anyway, it’ll be back the week after next with something good. I hope. I’ll be venturing all the way back to The Day Time Ended, a film from the early days of Charles Band’s filmmaking career.