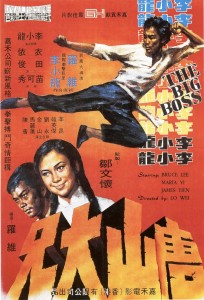 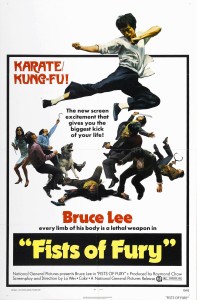 The first hour skillfully sets the stage for those ass-handings by focusing on James Tien instead of Bruce Lee. It always feels like Lee is the main character (and perhaps that’s just a product of me knowing he’s the main character), but Lo Wei, knowing the audience’s desire to see Lee kick ass, purposefully writes in a story conceit to make him abstain from fighting for the first hour. Bruce looks on with a cocky, disinterested look while James Tien does his best “movie kung fu” fueled by mid-range Shaw Brothers-style choreography (from ex-Shaw actor/choreographer Han Ying-Chieh, who also plays the big boss). Within just a few moments, it becomes clear that Bruce is the best fighter on-screen and he hasn’t even moved a muscle. And when a couple of henchmen stumble by and he knocks them out with a couple of quick, nonchalant strikes, even the blind members of the audience clearly know his power.

This creates something of an interesting dynamic between Bruce’s realistic kung fu style and the more melodramatic, arms-flailing style of old-school choreography. As real martial artists were still generally a rare thing in the martial arts films of 1971, you could easily view the first hour of The Big Boss as not just a slow build-up to the film’s story, or to Bruce Lee’s first fight, but also to the awakening of the Hong Kong moviegoing audience. By the time Bruce is about to throw his first kick of the film, we’re hungry and salivating for it. Even though we haven’t seen him fight yet, he’s been built up so much that this moment must be incredible to live up to it.

And even though I’ve seen this movie before, the first kick thrown by Bruce Lee blew me away. With that kick, Lee threw down the gauntlet to the Hong Kong film industry. After you’ve seen a real martial artist display his skill, you cannot easily go back to the traditional Shaw Brothers way of doing things. (Of course, I have to and will do so willingly, but you get the point.) Bruce’s first kicks are impressive and realistic and in stark contrast to every other fighter in the film. At that point in The Big Boss, perhaps 100 kicks had been thrown collectively by everyone but Bruce Lee, but in two quick kicks Bruce Lee became the world’s biggest martial arts star. The Big Boss became the highest grossing Hong Kong film of all time up to that point; its record standing tall until the release of Lee’s second film, Fist of Fury. 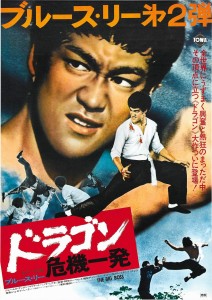 That all being said, there are tons of things about The Big Boss that are done in virtually the same way they’d have been done if this was a Shaw film. The fights feature many instances of the trampoline jumps common to Shaw films. The violence is brutal and doesn’t shy away from copious amounts of flowing, candy apple red blood (although the Golden Harvest blood formula does look more real than the Shaw’s). There’s a distinct focus on long knives, as well, which feels like a direct influence from the Chang Cheh film The Duel.

And while The Duel is definitely a better and more consistently entertaining martial arts film, The Big Boss has one major thing over The Duel (in addition to Bruce Lee): location shooting. The film is set in Thailand and was actually shot there. By not staging the battles and the drama on fabricated sets, it instantly elevates the film to a more realistic place and makes it a more marketable film outside of Hong Kong. I love the Shaw sets, but even a huge fan like me must acknowledge that they do kind of hold them back from being more widely popular. After realistic films set amidst real locations, it’s a little hard to buy back into the Shaw format, especially for the Western audience who was never bought in to begin with. I honestly think this is a huge reason why the film became such a huge success globally. Besides, of course, the whole Bruce Lee thing.

While The Big Boss was a groundbreaking genre achievement, I can’t ignore that the film is too long. It’s only 99 minutes, but a good portion of that can be summed up with “Workers go missing and the rest of the workers ask questions, only to be placated by the management with ‘We called the police. We’ll let you know when we hear something.'” There’s only so much of that that is believable, but even this can’t hold down the film for me. But it’s a definite flaw, I can’t deny that.

They also hold back pretty well on the Bruce Lee action. This is fine, there’s more than enough action for the story, but after Bruce is revealed as the consummate badass, it just makes it that much harder to sit through the slower paced scenes that Lo Wei is especially fond of. But “slower paced” doesn’t necessarily mean bad, and when these scenes eventually break away to reveal the film’s final 30 minutes, your wait is most definitely rewarded. The ice house fight is full of great moments, but it’s all about the finale at the big boss’s mansion. When Bruce Lee walks into a fight eating chips, and then eats a few more in between kicks to dudes’ faces, you know you’re in for a good fight.

The Big Boss introduced Bruce Lee to the Hong Kong film industry in stunning fashion. Had he signed with Shaw Brothers as he initially was courted to, I don’t know that he would’ve set the world on fire in quite the same way. It took a special convergence of events and people, and The Big Boss is definitely that. Does it live up to the bar set by later films? Of course not, but it shouldn’t be judged as such. As Bruce’s debut martial arts film, it’s an excellent piece of work. It’s also one of Lo Wei’s best looking films, filled with beautiful widescreen cinematography. I’m sure most of you have already seen it, but if not, what are you waiting for?