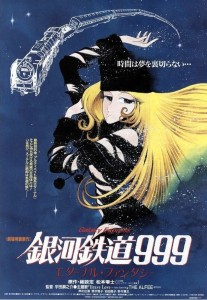 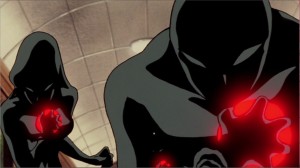 The film takes another change in tone from the earlier films, this time adding a bit of slapstick comedy overlaying the action. It’s not heavy, and mostly entwined with the visuals rather than the plot. The characters keep on talking and acting normally while the sight gags go by. This time Tetsuro appears younger than either of the previous films, and his absurd expressions might be a bit hard to swallow for some. Beyond that, however, is a lot of good imagery and fun action.

We start with Earth now totally under the control of evil robots who have mechanized the entire planet. Tetsuro has been imprisoned for the past year, and has apparently grown enough long, flowing hair to make any woman jealous. Outside his cell lies a woman encased in a block of ice. Despite looking awesome and being rather important to Tetsuro, the film never really explains who she is, although there was some implication that it might be Emeraldas. She doesn’t have the trademark facial scar, though, so I’m probably interpreting that wrong. In any case, the film does a pretty poor job of actually explaining itself. 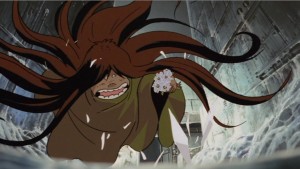 To get back to the plot, though, the guy in charge has decided that Tetsuro’s time is up, and they drag him off to be executed. So it’s a good thing for him that the Galaxy Express decides to bust in through the window and drag him off into space, thus beginning his latest adventure. From here out, things go back to the comforting familiarity of the 999’s crew and setting, complete with Captain Harlock once again filling the role of cavalry to the rescue. Apparently he’s got nothing better to do than follow the 999 around and wait for it to get into trouble.

There are some cool new characters, too. The new crew member, Cannon, may not have much to do, but she looks awesome. The new villain, Helmazaria, not only has a ridiculously awesome name, but she’s a total badass to boot. The final showdown is fantastic, with Helmazaria on the roof of the 999 firing down while Tetsuro shoots back from within, each of them trying to guess where the other is without a line of sight. 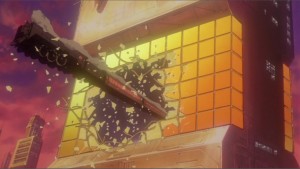 It’s not all fun and games, though. At less than one hour long, even this incomplete chunk of the story feels rushed. It barely has enough time to establish the premise before jumping into that showdown with Helmezaria, only to end without much of any resolution. It leaves us hanging with Tetsuro’s new quest to undo time itself, which is a confusing enough plot device even when handled well. In such an obviously incomplete and poorly explained film, it doesn’t help anything.

If the sequel had ever been made I might be singing a different tune, but without a conclusion I can’t recommend it. There’s too much good stuff in Eternal Fantasy for me to hate it, but for most people, it will provide more frustration than entertainment. Only big Leiji Matsumoto fans will want to check this one out.