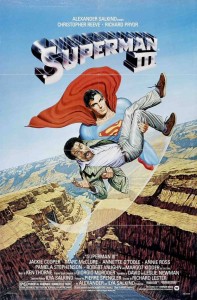 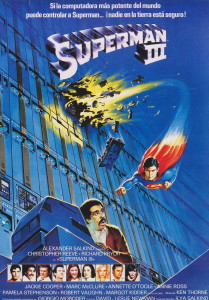 So plot-wise, Richard Pryor gets a job doing some computer work for Webster, and quickly attracts his attention through some creative accounting. Webster exploits his talents to kick start his world domination plans, all the while Clark Kent is heading back to Smallville to attend his high school reunion (and eventually running into an old high school crush, Lana Lang). This means that everything built up during the last two films about Lois Lane is thrown completely out the window for the sake of bringing in a new girl. I guess both versions of Superman II reset the world so that this kind of thing was possible, but it seems odd, to say the least, that Lois Lane has nothing more than a cameo here. The comic tone is the most fundamental change about Superman III, but I’d argue that Lois’s exclusion is almost as big of an issue. But I guess when you aren’t concerned with building on anything or being emotionally resonant, none of that matters, does it?

But before I get too far down the rabbit hole of despair, I must remind myself of how much fun I had watching this. I’ve always loved slapstick (and always will), so much of Superman III‘s comic, campy moments worked pretty well on me. I wasn’t laughing out loud like I remember doing when I was a kid, but I did sport a pretty healthy smile through most of it. Because this movie takes such a laser-guided nosedive away from the tone of Donner’s work on the series, if you want to get anything out of the experience other than a scowl and a furrowed brow, you just have to roll with it. I’d suggest asking Superman to turn back time (either through spinning the world backwards or through the magic kiss, your choice) so that you can see this movie without knowing about the previous Superman films. I think then, with all expectations and memories removed, it’d be much more apparent what is good about this one. 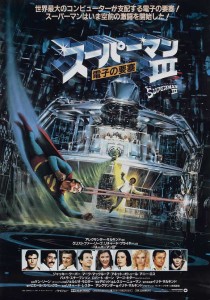 The best things are all stacked towards the back-end of the film, starting with the film’s most memorable moment: the junkyard fight between evil Superman and Clark Kent. This fight is fantastic fun, delivering something that the previous two films hadn’t touched at all. While the evil Superman storyline isn’t as effective as it could be (just as the similar storyline in Spider-Man 3 isn’t), the culmination of the story with Supes battling himself is a special FX tour de force. The untainted Superman isn’t in this movie a whole bunch either, so when this fight occurs I was famished and ready for some heroic Superman action, making every blow of the fight tense and laden with a desire to see Clark triumph.

The actual finale isn’t anything on the level of the previous Superman films, but what’s here is well-beyond either of those films in term of pure camp fun. When I was a kid, I was obsessed with this section of the film, rewinding it over and over again to re-watch it. While I loved the villains firing missiles at Supes with the video game targeting screen, and I equally loved the Kryptonite ray and the bubble shield, nothing can compare to the moment when the computer “pops a cap,” grabs one of the villains with a bunch of cables and proceeds to make them into a robot version of themselves. There are a few things in this world that will make me squeal with joy, and folks, this is one of them. TMI? Probably, but it turns her into a ROBOT! ‘Nuff said.

This is also where I was introduced to Richard Pryor. I had no idea he was anything other than a comic actor at the time (I was about seven years old or so), and I thought his performance in Superman III was pure comic gold. Now, having become a big fan of his stand-up, it’s always weird for me to go back and watch one of his family friendly films. He fits in well, and does a great job with the role he’s given, but knowing what he’s capable of makes it all somewhat disappointing. But that’s the sour wisdom of age talking, and Pryor really does do a great job here. He might not be the best character, and a lot of the writing is really, really questionable (from an adult standpoint), but none of that is Pryor’s fault. 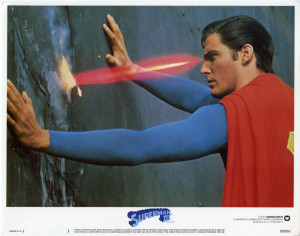 Superman III is definitely a worse Superman movie than the theatrical Superman II, but in many ways I had more fun watching this one. The laughs are more consistent (and by consistent I mean that Lester went for pretty much non-stop gags here), and the film flows much better. I guess that’s to be expected when the previous film was cobbled together from two very different, skewed versions of the same film. But that being said, Superman II is still the better movie simply because it tries a lot harder to be a Superman movie. Outside of the last 30 minutes, there’s not a lot of quality Superman stuff in Superman III, and I think that hurts the film much more than all the dumb comedy. But regardless, I still enjoyed this one quite a bit, and I was happy to recapture some of that old childhood magic. Just delete your expectations and roll with it, Superman III is a fun, strange little trip through the Superman universe.

It’s also interesting to note that this is probably closer to what the original two films would have been like if Richard Donner was never involved, as the Superman III screenwriters also crafted the original draft of the first two films… the draft that Donner hated and had severely re-written before shooting began.