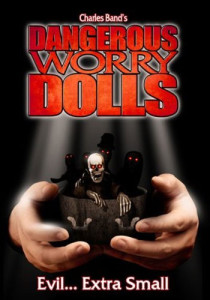 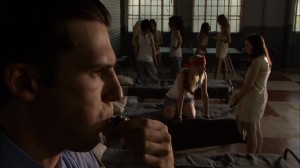 That’s not to say that Dangerous Worry Dolls doesn’t descend pretty deep into depravity, though. There’s the obligatory shower scene, and more female inmates strutting around in their underwear than would ever be plausible. All of that pales in comparison to the sadistic, rapist guard who bends down to smell his dildos before strapping one on and stroking it as a look of extreme pleasure washes over his face as he prepares to rape Eva. In many of Band’s films, I would say that these extremes are there simply to titillate and shock, serving little other purpose. In Dangerous Worry Dolls, because the story is so simple and strong, these moments also work to provide the character with the extreme motivations she needs to finally take matters into her own hands. Arguably, she’s not the one pulling the strings at that point (because the dolls have possessed her), but it still works rather well. 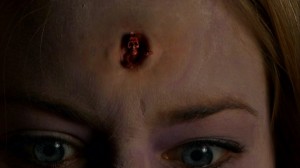 What surprised me even more was the acting. I found the entire cast to be great all around, anchored especially by an excellent performance from Jessica Morris. She’s in many of the modern Full Moon films, and I always look forward to her appearances. Her work is Dangerous Worry Dolls is perhaps her finest moment for the company, as she really digs into the role and lights up the screen. Morris takes the character from meek and average to possessed and driven, and it’s a joy to watch. It’s fortunate that they cast her in this role, because it takes a considerable amount of quality acting to make you forgive the fact that they chose to manifest the possession via a huge zit-like wound on her forehead. 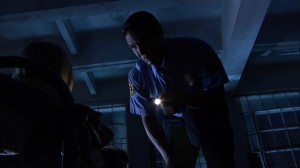 And this zit-like wound is going to be a deal breaker for many, because more often than not it looks ridiculous. There’s no way around it, it’s pretty laughable. I never minded it because I was invested in the story, and it helps that I actually like and enjoy cheesy FX, too. But that all being said, a good portion of the time this zit-thing is pretty awesome. Like, a “little skull doll crawling out of a forehead” awesome. The effect is incredibly well-realized and looks excellent. I loved every shot of that little angry skull opening its mouth and screaming. If Full Moon is looking for movies to make sequels to, I’d definitely be pumped for another one involving this dude.

Dangerous Worry Dolls isn’t a believable film, but if you’re coming to something like this asking for believability you shouldn’t be watching B-Movies. That being said, it does create a world within the prison, albeit a shallow one, and it is pretty true to the rules it sets up. I loved Dangerous Worry Dolls and I think anyone who enjoyed any of the more recent Full Moon films and missed this one should definitely check it out.

Next week on Full Moon Tuesday, I’ll be venturing deep into the back catalog to review 1977’s sex comedy musical version of Cinderella!