> Reviews by Author > Stephen's Reviews > Stephen reviews: From Up On Poppy Hill (2011) 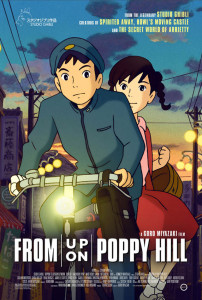 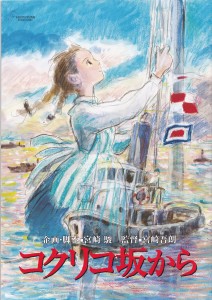 This might be something of a moot point, as even their adaptations have been good, but I think a case can be made that their original works were even better. While I did enjoy it, Poppy Hill can be used as an example, although extenuating circumstances do apply. First off is the fact that Hayao Miyazaki is drifting, albeit slowly, further into retirement (he is still credited with the screenplay for this film). Also, Goro Miyazaki doesn’t have, or at least hasn’t yet developed, his father’s skill with the craft. That being said, I think he did a better job here than with his previous film, Tales of Earthsea, so he may still rise to greatness.

I think my biggest disconnect with this film, though, is that it just isn’t my thing. Poppy Hill is a romance, plain and simple. I don’t even mean a romantic comedy, or any other form of the genre. It’s a romance, and nothing else. Unless you want to count the historical fiction aspect, there is no gimmick to the film. Boy meets girl, they have their ups and downs, and everybody has a happy lovey-dovey ending. Those ups and downs might throw you for a loop now and again — a woman in front of me in the theater gasped in shock at one particular development — but it’s a pretty straightforward love story.

And this is where I have a bit of trouble writing about it. I am no expert on romance stories, film or otherwise. I can’t tell you whether it was better or worse than any other romance tale; all I can do is relate my own reactions to it and hope that tells you something useful. The story moves pretty slow, especially at the beginning, and I found myself kinda bored during the first half. But this is a Ghibli film, and even when you’re bored all you have to do is look at the screen. You’ll undoubtedly find something interesting there. 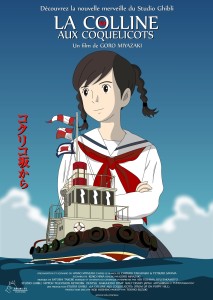 For me, that was all the technology and environments of Japan in the 1960s, which the film lavishly details. In this way it is similar to Whisper of the Heart. The cramped roads that have as many pedestrians and bicyclists as cars, the old-fashioned stoves, they way they store vegetables under the floorboards in the kitchen, it is the simple daily actions brought to life in gorgeous detail that can make Ghibli films fascinating even when the story isn’t grabbing me. I especially loved the old printing press they make the school newspaper on. It’s a literal press. The characters insert a blank page and drag an ink roller over it by hand, one page at a time.

The visuals here are gorgeous, as any Ghibli film is, but I did have my disappointments. The biggest is that Goro is far more accepting of CG than his father. This is Ghibli, of course, so it looks as good as it possibly could. In any other film, it wouldn’t have bothered me. But this is Ghibli, damn it! I expect better from them. I doubt most people would even notice, but for me it was rather depressing. Especially that bonfire scene. It was decent looking CG fire, but it was also obviously CG, and that never sits right with me. The other big CG element was a huge boat at the end of the film, though it at least looked better than the fire.

The plot improves in the second half as well, and I became more interested in seeing it through to the end. This is when those ups and downs kick in and the family history of the characters starts adding some depth to the story. Umi lost her father in the Korean War, and Shun never knew his real father. As the two grow closer, they also look into their pasts, and find some unsettling connections that have a serious impact on their relationship. 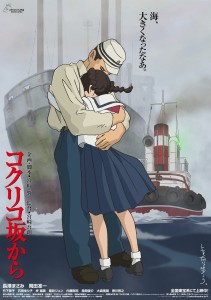 The large subplot involving a rundown school building scheduled for demolition starts picking up speed in the second half as well. The students who use it for their after-school clubs are trying to save it. They start renovating it in the hopes that cleaning it up will make the school change its mind. It doesn’t sound very fascinating, but there is a slice-of-life aspect that reminds me a bit of Mamoru Hosoda’s films. It is done with a more reserved feel than Hosoda uses, but I liked it for its very Japanese feel to the characters and their actions.

That Japanese subtlety of emotion fills Poppy Hill to the brim. In some ways this contributes to making the film slower, but in other ways it brings out that Japanese flavor and made me appreciate the film more. I think the best example of this is when Umi leaves for school one day, and one of her family members wishes her good luck with Shun. It could have had some melodramatic response of denial or embarrassment, but instead Umi thinks for a moment, then says “Thank you” and heads out to school. Had that scene happened any other way, it would have left me wrinkling my nose at the smell of cheese. The movie has no need to hit you over the head with its emotions, and the story feels all the more real because of it.

And that realism perhaps sums up the film best. It’s sweet, but without the sappiness. I imagine romance fans will eat this one up and love every moment of it. Someone that wants something more adventuresome however, will undoubtedly find it rather bland. I would never put this on a favorite films list, but the fact that I enjoyed such a simple romance story at all says quite a bit.