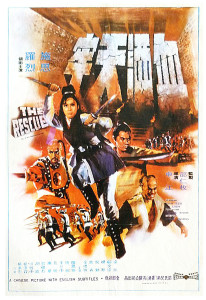 In terms of action, the thrills that The Rescue offers are pretty fun. They aren’t always as quick or as well-choreographed as you might like (even with Tang Chia and Yuen Cheung-Yan in charge of the action), but they more than make up for this with ambitious wire work and inventiveness. Like the scene where Lo Lieh uses his martial skill to swipe multiple long daggers out of the air, finishing his movements with the blades poking through the spaces in between his fingers, like a kid playing Wolverine with silverware. I’m always a sucker for wuxia feats that I haven’t seen before, and The Rescue has many of these moments. And just because this was three years before Wolverine made his first appearance in comics, I’m just going to assume that this moment is what influenced Marvel in their creation of the character. I’m sure it’s not the case, but a boy can dream, can’t he?

As I mentioned, the wire work is incredibly ambitious here. Shen Chiang previously took the art form to new heights with his film The Winged Tiger, specifically building a film around a character who’s flying around through most of his action scenes. But if you’ll remember from last week’s review of The Swift Knight, I noted how that film was a watershed moment for wirework. Instead of swinging, the characters were actually flying upwards and precariously landing on objects. The trend continues in The Rescue, but here it’s even taken a step further. Lo Lieh and Shih Szu fly around flawlessly during the fights, all on wires and with no reverse filming (or at least no noticeable uses of reverse filming). Lo even throws dudes across the screen with the help of wires (which looks incredible… imagine what it must have felt like to do it!), making his character one of the most dynamic in the film. Oh and did I mention that he wields an ax on a chain that he throws out in rapid succession, embedding it deep into one victim’s head after another? Shih Szu holds her own in the action scenes with either sword or daggers, once again proving that she was an ample replacement in the Cheng Pei-Pei type of roles, while also bringing her own energy to the characters.

The film’s story is its biggest weak point, though, as much as I love where it opens and closes. The middle section is meandering and slow, even if it does have a few unique sequences not found in your average Shaw film. Things like a fun tunnel digging scene with characters wearing neato woven straw helmets. I think I enjoyed this much more than was intended, but what can I say… I love tunnels. Anyway, just about the time you’re wishing the film would speed up, it moves into full action mode and never lets up until “THE END … ANOTHER SHAW PRODUCTION” rockets onto the screen as always. But before it gets to that final pronouncement, there a bunch of really fun group fights (including the one featuring that Bolo moment I mentioned earlier), a whole hell of a lot of bright red Shaw blood, and an incredible revelation (complete with Also sprach Zarathustra on the soundtrack) that had me howling. And I’m not even going to talk about the final moment of the film, a truly shocking moment if there ever was one. Most of the non-Chang Cheh films are a little light on the red stuff, but The Rescue blasts it out like Chang Cheh was standing in the wings himself. Needless to say, I greatly enjoyed it.

The Rescue has more than its fair share of entertainment, and if it didn’t drag itself around so much in the middle, it’d be a very special film. But problems aside, The Rescue is still a great watch, and totally worth your time.

Next up in this chronological jaunt through the Shaw Brothers Martial Arts catalog is Chang Cheh’s Duel of Fists! I’ve been eagerly awaiting this one for years, so I hope it lives up! See ya next week!