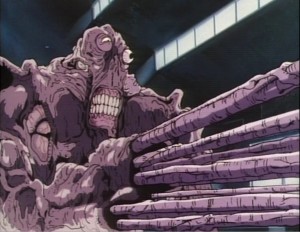 All the monsters and demons reminded me of Wicked City, but much lighter in tone and without the cringe-inducing depravity. There are some hints at just how dirty the creators’ minds are, but it’s nowhere near the pervasiveness nature of Wicked City. I didn’t even notice until I scanned the film for screenshots that one of the monsters had giant penis tentacles coming out of his back. And the final showdown pits Hyoudo against one disturbing looking naked woman. There are some fucked up elements to the film, but they’re all left to the realm of innuendo rather than actual sex scenes.

There’s every bit as much violence and gore, though. The monster transformations are quite good. It has nowhere near the production value of Wicked City, but it still has a lot of great visuals. Blood-spattering violence, futuristic power armor, and kick-ass martial arts fights run rampant through this movie, and they’re all a lot of fun. There’s also a shallow pass at a love triangle. It’s as if the creators took every anime trope they could think of and squeezed it into one package of pure entertainment. There’s not much of an intellectual focus, but who needs that when you have exploding demons, robot martial arts showdowns, and people getting their heads bitten off. 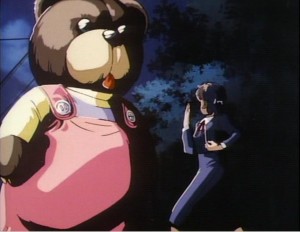 That lighter tone also shoves the film out of the horror genre. It’s frequently ugly and disturbing, but never really scary. It’s much closer to a comedy, but it isn’t really that either. Sure I was laughing my ass off through most of it, but it was mainly from the sheer absurdity of the action sequences.

Battle Royal surprised me at every turn with its crazy antics. It goes from the grotesque to the incomprehensible when the main character wears a leopard mask for no reason, and the demon hunter hurls a manhole cover like a Frisbee. Or my favorite, when a girl walks home at night gets ambushed by an enormous teddy bear. I’m amazed at how much madness they managed to cram into a one-hour adventure, and it had me laughing out loud all the way.

This film walks the borders of depravity, and some people are going to want to avoid it for that. At the same time, it never really goes anywhere sexually beyond some random nudity. So if you thought Wicked City looked interesting but you didn’t want the perversity, this might be a good substitute. Besides, where else are you going to see a guy in a leopard mask get attacked by a classroom full of possessed desks? Just make sure you turn off your brain and take everything at face value, and you will have an adrenaline-pumping, eye-popping, laughter-inducing action extravaganza.

I couldn’t find an actual trailer for this, but this short clip is a good example of what goes down in this movie.