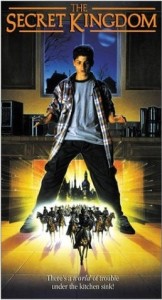 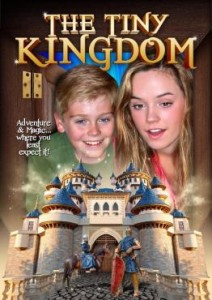 The toy-staring boy comes upon a warehouse full of giant carnival decorations. Stuff like a 20-foot-tall knock-off Garfield, a giant head of Marvel’s The Thing adorned with blinking Christmas lights, or any number of wild Mardi Gras clowns decked out in purples, greens, and yellows. Anyway, this leads to more toy staring, but the whole time a creepy old man has been following this kid around. He approaches the kid in the warehouse and pulls out his lightning rod. If that sounds rather suggestive, it doesn’t come off that way at all in the movie, but I’m sure a psychoanalyst would have something deep and meaningful to say about it. Anyway, the lightning rod is out on display and the old guy is trying to sell it to the kid. Every kid wants a lightning rod! Especially one that’s all wacky lookin’! But this kid’s too cool for a lightning rod, so he just runs home.

And what does this kid do when he gets home? Gold star for you if you said, “He puts on a pair of round, John Lennon spectacles that have squares of sunglass tint over most of the lenses, pulls out the pair of drumsticks he’s had in his back pocket this whole time, and then drums his way around the house, hitting everything in sight from the banister to the shelves to the door jambs.” This is truly inspired WTF here. And this kid is really into his drumming. When his siblings start to fight over his sister’s lost diary, does this cool kid give a care? Nope. Rat-a-tat-tat. What about when his little brother is chased around the house and asks him for help? Nope. He replies by saying, “You’ve dug your grave, now die in it,” and then: rat-a-tat-tat. This kid is just too cool for anything, including school. 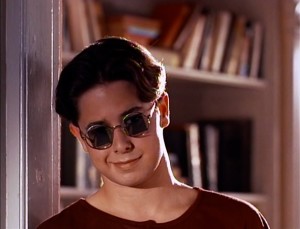 What’s going on is that under these kids’ kitchen sink, there’s a miniature world called Relkin and the rat-a-tat-tat brother gets sucked inside it. There he finds a world torn in two by a tyrannical government built around body modification and plastic surgery to achieve absolute perfection. Thankfully, he lands in the hands of the good guys (the rebellion) and it’s up to our rat-a-tat-tat hero to save the day. But oh no, now his sister has been pulled into the world by the villain, and he’s told her nothing but lies! How will they ever get out of this perilous scrape! Or even worse, how will they explain it all to Mom? O. M. G. 🙁 😕 😛 #LOL

So if you haven’t caught on, this movie is insane. On one hand, it’s very much a kid’s movie, but then there’s the subplot about all kinds of body experimentation and surgery. I guess kids are supposed to learn that it’s a wild and crazy idea to want to look your best through surgical means, but I doubt that’s what they’ll take away from the scene where we get to see one man who’s been surgically (against his will?) turned into a humanoid hunting dog for the villain’s military. And what about all the people with their eyes removed? So creepy! The Secret Kingdom is exactly the movie you’re looking for if your kid is obsessed with becoming the next Lizardman. 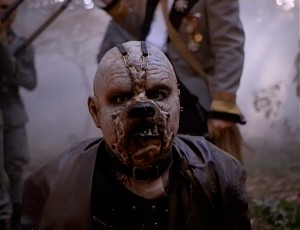 I’m sure this film warped some kids’ brains over the years, and a part of me is happy that this film is back out in the wild, ready for rental at thousands of Redbox locations nationwide to corrupt even more younguns and introduce them to B-Movie thrills. I know some eight-year-old kid is out there refreshing the Full Moon page on the RedBox website, hungrily awaiting their next remastered release. He may only exist as a figment of my imagination, but I sleep better at night if I believe he’s real. Some people turn to Jesus to quiet their soul, but I need the kid refreshing RedBox’s website. Don’t judge.

Full Moon does falls into the trap of making the girl seem gullible and stupid by having her brother instantly reject the idea of modification, while his sister accepts it and asks to look prettier. I guess I’d just like to think that both kids would know better, but maybe that was just Full Moon’s failed attempt at giving the sister some sort of character flaw. At this point, I’m in too deep to expect anything of the sort from Full Moon, but I do wish sometimes that their films weren’t quite as sexist. But that’s more of an issue with the proper Full Moon films than the Moonbeam ones.

Through all the fun, exciting B-Movie nonsense of The Secret Kingdom, it does overstay its welcome quite a bit. The last half hour was just tortuous to me, with a lot of nonsensical battle between the government and the rebellion. Action scenes have never been Full Moon’s strong suit, and this is not the movie to change my mind on that. At the end of the day, though, this doesn’t matter as the sheer power of the WTF premise and the rat-a-tat-tat main character (who unfortunately does not have a pivotal moment in the finale where he takes out the villain with a resounding rat-a-tat-tat) are enough to make The Secret Kingdom worthwhile watching for anyone that enjoys low-budget kid’s cinema.

And on top of all that, the little brother calls someone a “Power Dork,” which I really need to remember and start using.

Next week on Full Moon Tuesday, I’ll be checking out a film I’ve wanted to see for years on the strength of the title alone: 1993’s Mandroid! Oh yeah!