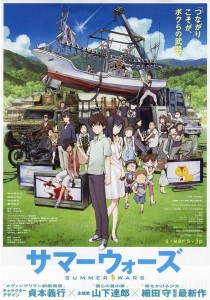 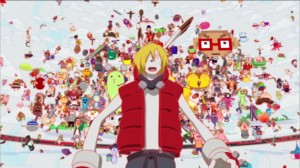 Kenji wakes up the next morning to find that someone has stolen his account in Oz and gone on a virtual crime spree with his avatar. Since security in Oz is so famously impenetrable, the police peg Kenji as the culprit and plaster his face all over the news. (The moral of the story, kids, is don’t reply to spam e-mail. It will screw you every time.) Meanwhile, Natsuki’s family quickly sees through the story she came up with for her fake relationship with Kenji, which leaves him even further out of favor with the family.

The rest of the film is Kenji’s quest to clear his name and stop the villainous hacker from ruining the entire online world of Oz. The consequences go beyond mere pranks, and start impacting the real world, too. As more accounts get hacked, more problems arise. GPS systems start screwing up, clogging traffic across the world, emergency response workers get flooded with false alarms, and by the end of the film the hacker even manages to take over a satellite and aim it to crash into a nuclear reactor. 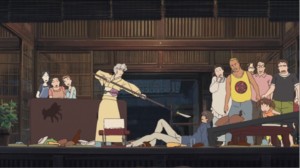 This makes the film sound more grim than it actually is. Just like Girl Who Leapt Through Time, this film is filled with a sense of lighthearted humor. Natsuki’s rambunctious extended family adds a sense of fun and excitement that really elevates the entertainment value of the film. The overcrowded family dynamic is my favorite part of the film. And my favorite character is by far Natsuki’s almost 90-year-old grandmother, who rules the family like a monarch. Her charisma, determination and decisiveness leads the family through the crisis, and to me she is a far more heroic and central figure to the plot than either of the lead characters. And if you piss her off, she will not hesitate to beat your ass with an antique spear.

The animation deserves some mention as well. Much of the Oz scenes use CG, and this usually is a very bad thing for me. But I have to admit that Summer Wars has some of the best CG I’ve ever seen in an anime. It blends with the traditional animation so well that at times I actually had trouble telling where the CG begins and the 2D ends. The CG is also reserved entirely for Oz, where it feels more appropriate. I hate admitting it, but the CG rarely felt out of place or distracting, even under my critical observations. 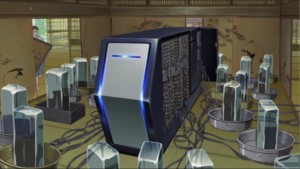 I wish I could say the entire film was this entertaining, but problems in the second half of the film left me rather disappointed. In the end it just gets a little too illogical. It’s not that I don’t like the silliness. It never bugged me that the champion of the online martial arts tournament and the creator of the computer program responsible for breaking Oz’s security both happen to be members of Natsuki’s family. Nor did I mind when the careers of the various family members allowed them to gather a room-filling supercomputer, a military grade telecommunications transmitter, and a boat I never did figure out why they needed. It never even bothered me that they parked the boat in the backyard koi pond, or that one of Natsuki’s cousins took the blocks of ice meant to keep the supercomputer from overheating. I always enjoyed the family’s antics; those are my favorite parts of the film. No, what bugged me was the way Oz was handled. 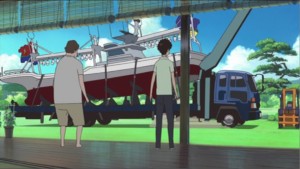 Too much of the online events felt inaccurate to how a computer would function. When they trap the enemy in a virtual castle and then start flooding the place, I sat there wondering just how you could drown something on the Internet. And when they started using hijacked accounts as literal poker chips in the online casino, I just wasn’t buying it anymore. I’m no computer whiz, but I can’t imagine the Internet working this way. The Oz scenes felt false, and that took me right out of the film.

It also didn’t help that it uses the old time-limit trick to ratchet up the tension. I’ve never been all that fond of the technique; it’s cheap and predictable. You always know it’s going to go right down to the wire and the characters will barely succeed with only a second or two to spare. For me, it diminishes the tension rather than enhancing it.

If you can tolerate the illogical nature of the online scenes, then you will probably have a lot of fun with this film. Even though I stopped caring about it as the film wound down, it has a lot of quality moments that make it worth watching.