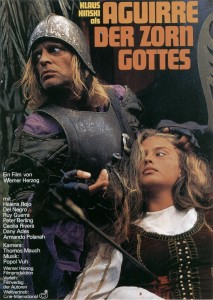 Expectations: High, but I’ve got a bad, pretentious feeling for some reason.

There aren’t many movies you could call both boring and captivating, but Aguirre, the Wrath of God is just that and more. It’s an enigmatic film, incrementally drawing you into its slow-moving and somewhat surreal world, and testing your sanity along with the characters’. From what I’ve seen of Herzog’s filmography, he’s long been fascinated with characters that push the bleeding edge of the human mind, characters that left the point of no return behind long, long ago. Aguirre, the Wrath of God is simultaneously a stunning Herzog film and an impenetrable one, reminding me of how I felt after watching 2001: A Space Odyssey for the first time, which is to say I’m a bit perplexed and will need to watch this one again to really get down on it.

Aguirre, the Wrath of God is about a 16th century expedition up the Amazon to find the city of gold, El Dorado. It’s a fool’s errand, of course, but that doesn’t stop these Spanish conquistadors from relentlessly pushing forward in spite of every odd stacked against them. Klaus Kinski plays Aguirre, the group’s second-in-command and lead nutjob. He quickly asserts his power and controls the men through wild promises of untold riches that await them ahead. 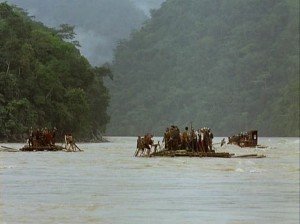 What struck me initially about Aguirre, the Wrath of God was how realistic it felt. The film was shot on location in the Peruvian rainforest along the Amazon river, and this fact is undeniably ever-present throughout. Everywhere the camera turns reminds us that our characters are really out there in the wilderness, slowly losing their minds. The film opens with some quick text setting up the time period, stating that only one journal remains from the expedition. Readings from this journal make up narrations over certain sections of the film, and between these spoken diary entries and the stunning locales, I felt as if I was watching a documentary by way of time machine. Herzog not only captures the feel of a 16th century expedition, he does it in one incredible shot, selling us the idea of the film immediately.

Some establishing shots give us a brief idea of what’s going on, but it isn’t until the third shot of the film that we truly understand the breadth of the undertaking we’re witnessing. The camera captures a craggy, mossy mountain shrouded in fog, and as the shot continues we start to notice slight movement in one corner. It is a distant line of men traversing the treacherous terrain. The camera slowly pans down to reveal a more defined path, also filled with a single-file line of men. The camera continues downward in this manner, revealing more men looking closer to ants than humans, one following the other without thought or purpose. They are simply moving forward, and hopefully the guy in front knows what the hell is going on. The camera pans lower still, showing us even more men, these much closer as they walk up switchbacks to climb the mountain where the camera rests. In this one shot we can feel the scope of the expedition; the honesty and the reality conveyed in this one image is immense. There just ain’t nothing like a whole load of dudes on a mountain, CG be damned. 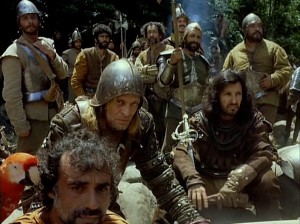 [Editor’s Note: There will be spoilers ahead.]

My notes are filled with the word futile, as nearly everything that happens in the film is purposefully pointless and futile. Greed is a futile endeavor, and it’s never more apparent than in stories where all the modernity is drained out. We are then able to witness the struggle objectively and perhaps learn something worthwhile from it. Just as the pursuit of greed and wealth is futile, so is blind dedication to authority. Most of the men never question Aguirre, they simply do whatever he asks (thanks mostly to the promise of wealth) and slowly die off one by one. As the circumstances become more dire and dissension begins, Aguirre dubs himself the wrath of God, calling on what might be the men’s most powerful controlling force: religion.

This declaration is followed by a couple of shots of a mouse mother pulling her babies out of their straw mouse nest, even the rodents know the jig is up. The men are out of food and eating the moss that grows on the raft’s logs, their last moments are close at hand. But this descent into madness is unlike any I’ve ever seen before, as it’s played with subtly and without the broad strokes of madness usually used in films of this nature. The only slight exception to this is the characterization that Klaus Kinski gives to his character, Aguirre. Throughout the film, he’s a wide-eyed crazy man walking with a strange gait and controlling his subjects without mercy. Kinski is much more subdued here than any genre fan knows he can get, but I felt this somewhat reserved quality made the character feel even more wild, intense and batshit crazy. There are few actors that can pull off this type of role, and Kinski is absolutely superb as Aguirre. 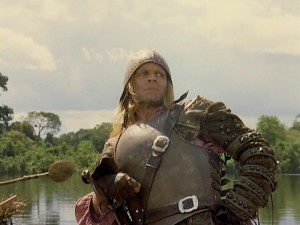 My high praise might not line up with those three stars at the top of the review, but that’s where my boredom comes in. The film is excruciatingly slow in spots, going without dialogue for minutes at a time or serenading me to sleep with its lusciously hypnotic electronic score. This is an arthouse film, for sure, so don’t go into it unaware. It is not for those looking for a rollicking adventure down a river. Some of my tiredness and boredom can be explained by recent illnesses and starting the film later than usual, but there’s just no getting around the methodical pace and the dreamy music. That being said, I could see re-watches elevating this film far beyond those three stars.

If you’re interested in a very different and unique take on going crazy via futile pursuits, then look no further than Aguirre, the Wrath of God. Fans of Apocalypse Now will be interested to note the influence that this film had on Coppola’s later classic, but to even mention this feels like I’m cheapening what this film is trying to do. Aguirre, the Wrath of God is a must-see film for seasoned fans of cinema, and it definitely deserves its place as one of cinema’s greatest arthouse films. It shows iconoclast director Werner Herzog delving deep into a lifelong obsession with obsessive individuals, and capturing a film truly unique and impressive.

Aguirre, the Wrath of God was a part of the 2013 Blind Spot Series where I see one movie a month that I feel I should’ve seen a long time ago. It’s all the brainchild of Ryan McNeil over at The Matinee, one of the web’s premiere film blogs. Head over there tomorrow where he’ll have a post of his own for the series, as well as links to all the other people taking part in the series.