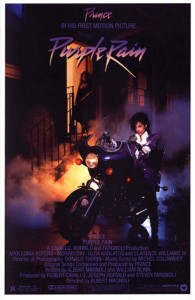 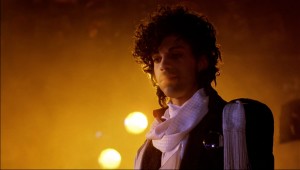 But like many films classified as “art,” Purple Rain isn’t always the most enjoyable experience. It’s challenging and hard to watch at times, but through these strong emotions and struggles comes rebuilding and steps towards positive growth. While the film can be somewhat slow-moving at times, it ultimately ends as an impressive work, tying together its themes and character struggles well. When I first saw the film, this full arc was somewhat lost on me as I was overly focused on the distressing fact that Prince was slapping Appolonia and Morris Day had a girl thrown into the dumpster. I was shocked at its frank and over-the-top depiction of this, but now that I knew it was coming I was able to focus on the film better.

But that’s enough high-minded talk, let’s get to the fun stuff! The live footage is incredible. If you’re a Prince fan and you haven’t seen this, you’ve been living under a rock and you need to come out for some air. Purple Rain will caress you with its sweet sounds, its gorgeous colors and its sensual love scene that I’m shocked got by the censors. Seriously, this is one of the steamiest non-nude love scenes I’ve ever seen. It’s intense and it’s all done in a single shot that slowly moves from one side of the room to the other, and then patiently zooms in, tighter and tighter, until the screen fades to white, representative of Prince and Appolonia’s white-hot passion for each other. And let’s not forget about their literal roll in the hay during When Doves Cry! Even though it amounts to just a few seconds of footage, this sensuous moment takes an idea immortalized on hundreds of trashy romance novels to vivid life. 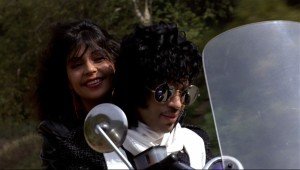 In terms of the songs, they’re great. But you knew that. Well, hopefully you knew that, because Purple Rain is one of the great albums of our time. In the nearly 30 years since the release of Purple Rain, I’m sure many lovely words have been written about the album. It’s not my personal favorite (that’d probably be Dirty Mind), but it contains what is arguably Prince’s best song (Purple Rain) and it deserves every word of praise ever thrown its way in the past, present and future. It’s just a fantastic, unique album, and I think the movie and its connective story only helps to solidify its place in the history books.

But honestly, I think my favorite aspect of the film is the cinematography. Everything in this movie looks superb, and I have never seen the look of a live performance and its stage lights captured so perfectly and beautifully on-screen. It manages to romanticize the performances, while also capturing them as a documentary would, letting us go back in time to Prince’s intense and unique performances of 1984. Every song performed by The Revolution is stunning and memorable, whether it’s Let’s Go Crazy over the perfectly edited opening montage, the emotional release of Purple Rain, or his shirtless, glistening version of Computer Blue. You won’t be able to rip your eyes away from the screen. 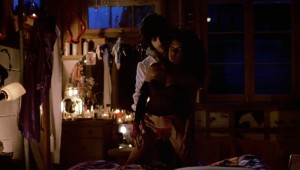 To bring it back to the story for just a bit, my favorite moment of the film is when Prince arrives home angry and storms around the house looking for his abusive father. The scene is scored with a beautiful, melancholy piano melody and when Prince finally finds his father he’s in front of the piano playing the song. In this moment so much about the movie clicks into place and I instantly understood the underlying theme of Prince following in his old man’s footsteps (in both positive and the negative ways). Unlike a lot of the other moments in Purple Rain, this scene isn’t glamorous, but it’s my favorite scene in the film and an incredibly affecting one.

Viewers willing to give Purple Rain time to grow and reveal itself will find a lot to think about after the film is over. Beyond that, the fiery love scenes, the intensely gorgeous live footage, and the distinct ’80s vibe should be enough to make this a worthwhile watch for most people. You just can’t go in expecting it to be pure fun like I did my first time through. I had a rude awakening, but I’m glad to have watched it again and seen it with fresh eyes.

And if you’re feeling like comparing my writing style from two years ago to what it is now, here’s the brief review I wrote for the film when I first saw it.