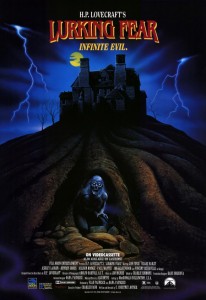 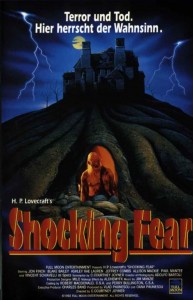 Anyway, the first story thread focuses on John Martense, a guy just out of prison and looking to dig up his father’s stash of money stolen from some gangsters and stuffed inside a corpse. Hot on his trail are said gangsters. The second thread involves Jeffrey Combs as a chain-smoking, thick-bearded doctor with a commando girlfriend played by Hellraiser‘s Ashley Laurence. They’re holed up in the abandoned town of Leffert’s Corner, in the church specifically, and hoping to once and for all rid the town of its curse. And what is this curse, you ask? It’s those white-eyed, subterranean-dwelling mutants I mentioned earlier, of course!

When these two storylines intersect, Lurking Fear becomes something of a re-done Key Largo, if you substituted white-eyed, subterranean-dwelling mutants for the hurricane. But even that isn’t a fair description of the film, as it never specifically focuses on the fear these creatures cause by lurking about under the floorboards. Instead — as many Full Moon films do — its sights are set on interpersonal drama. This is much cheaper than gore and FX, so I understand it, but this movie had a million-dollar budget. Peter Jackson made Bad Taste for under $30,000 and that has an incredible amount of FX, so Full Moon has no excuse.

Lurking Fear was made near the height of Full Moon’s heyday, when they released films like clockwork nearly once a month and they always had a ton of upcoming releases. As for as I know, their budgets rarely reached the million-dollar level, so even knowing their penchant for limited gore and FX, it’s interesting to see what they actually put on the screen when given that kind of money. Sure, they got some big horror names in Jeffrey Combs, Ashley Laurence, the very recognizable face of Vincent Schiavelli, and the star of Hitchcock’s Frenzy, Jon Finch, but where did all that money go if most of the movie is a few people talking in a couple of locations? 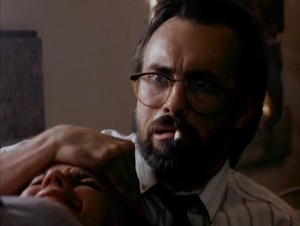 That’s what I thought all the way up until I got to the closing minutes of the film, when instead of one white-eyed, subterranean-dwelling mutant, there were a group of them, and shortly thereafter nearly everything in the movie up to that point exploded. The massive explosions don’t come out of left field, but they do stand in stark contrast to the rest of the film’s modest look. I’m not one to complain about explosions, quite the opposite actually, but I think this is a great example of Full Moon’s irresponsibility with a larger-sized budget. Instead of producing a film with a great script and really putting everything they had into it, we get massive, ridiculous explosions. Again, I’m not complaining, but this is a great example of the general production philosophy of Full Moon, although most of their films never pay off as grandly as Lurking Fear does. If only they had the funds, maybe every Full Moon movie would end with massive explosions.

But despite all my issues with the film, I did have fun and I did find it an oddly entertaining movie. The Lovecraft story elements were a definite, creepy highlight, I only wish they were the main focus instead of one of the many sub-plots. There are also quite a few good B-Movie moments, such as the time when our hero John is forced to dig up his grandmother’s grave, and after the gangster’s henchmen throws her body at him, he uses it as a shield when they start firing their guns at him. The two female leads showdown in the rain in something of a mud wrestling scene, and the makeup FX on the white-eyed, subterranean-dwelling mutants is pretty damn good. But these moments paled in comparison to one line spoken by the gangster’s main henchman to our hero John: “Don’t swing your dick with me, boy, or I’ll cut it off!”

Hmm… maybe that script wasn’t so bad after all.

Next week on Full Moon Tuesday, I’ll be checking out the very cryptically titled film, Murdercycle! With that title, it’s gotta be good, right?