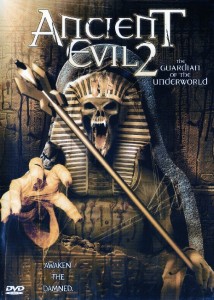 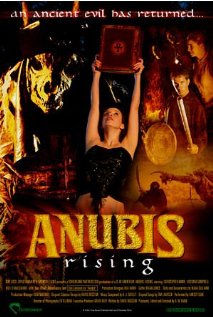 The story is classic horror movie: five 20-somethings venture out into the woods to perform some dark magic, namely to summon the spirit of Anubis from the underworld. I was never clear exactly why this was happening, but I like horror movies so the why never mattered and I never questioned it. It’s a horror movie, of course they’re raising Anubis from the dead! As you’d expect, Anubis quickly breaks free of their control and runs amok through the Massachusetts forest, killing and dismembering anyone in his path. Sounds good, right?

It really is kinda good, surprisingly so, but the problem lies within two simple facts: it takes a good 45 minutes before Anubis enters the film, and once Anubis does make an appearance, the movie devolves into 50 straight minutes of yelling, running and altogether boring horror filmmaking. It’s a strange reversal of the common horror formula where the tension building is boring and the killings are the exciting bits; here I was much more engaged with the strange way the film built up its characters during the first half. But it’s definitely not all bad with Anubis around. It is a dude in an Anubis costume running through the forest and occasionally ripping people’s heads off with his bony hands. But — and this is probably the film’s biggest flaw — it’s just too long.

Many low- and no-budget films just don’t know when to call it quits, and I’d much rather sit through a brisk 65-minute film, than fight myself away from boredom and sleep during a painful 95 minutes. 30 minutes might not seem like much of a difference, but trust me, it can be a goddamned eternity. This one woulda killed if it were even 20 minutes shorter. And what was so frustrating about it was that at about an hour in, it feels like it’s almost over. But then, completely to fill time, they introduce some new characters, thus stretching out the film needlessly. That’s one of my most hated feelings in a film: the sensation of the building climax and the ending right around the corner, only to find out it was only a ruse! Boo!

The film did hit my nostalgia button pretty well, though, by setting one of its early scenes in a neighborhood video store. It’s always nice to see the racks of tapes, even if the scene was way too long and completely pointless. I also enjoyed the “ancient statue of Anubis” that looked more like a souvenir from the Luxor casino in Las Vegas than a relic from thousands of years ago. And I also can’t complain too much about the acting, as it’s all better done than I would’ve expected from this level of production. That’s not to say that there’s some unsung Brando slumming it here or anything, but fans of no-budget horror will definitely find other things to pick on than the acting (but don’t worry too much because there’s also a lot of hilarious acting to be found here as well).

For what it is, Ancient Evil 2: Guardian of the Underworld is a lot better than it should be. The Anubis costume looks great and the filmmaking is pretty good. I also have to give them credit for actually trying to make a story-driven film for the first half, something a lot of low-budget horror films don’t bother with. Unfortunately, these aspirations are also what kind of dooms the film to the cesspool of indifference, but I’m positive that someone out there will truly enjoy and revel in the brand of fun this flick offers.

Next week on Full Moon Tuesday, I’ll be back to Full Moon movies proper with another of their H.P. Lovecraft adaptations, Lurking Fear!