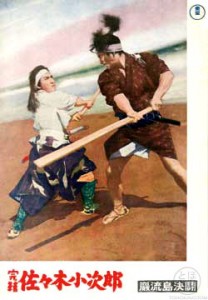 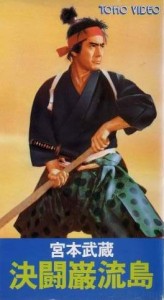 What also makes the duel so gorgeous and watchable, is the fact that it occurs on the beach at sunrise. There aren’t many things more universally beautiful than a rising (or setting) sun, and as a backdrop to a samurai duel, it doesn’t really get much better than that for fans of this type of cinema. Every shot is an iconic image, and every movement of the men is intense and filled with their martial strength. This film is seemingly less tragic than the last two, but the final moments prove that once again, we are witnessing a tragedy. The results of the battle aren’t unexpected, but it’s the way that the characters react that make us reflect on what the battle means for the two men involved.

And while this battle represents the pinnacle of Musashi’s journey on the way of the sword, it also represents the beginning of the end. With this battle complete, there is no more left to achieve; he has reached the uppermost heights of swordsmanship and will never be challenged in any real way again. One hopes that upon returning to Otsu, Musashi was able to continue growing along the alternate path of love, but I imagine he wouldn’t abandon the way of the sword. Even still, I like to think that he found some peace with Otsu after the final fade to black. And since this tale is a fairly fictionalized version of reality, I think I’m entitled to imagining this great character doing just that, instead of the reality of the situation where there never was an Otsu and Musashi died alone in a cave of what is thought to be thoracic cancer. 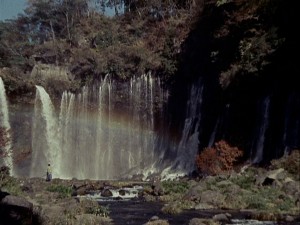 While it is interesting and engrossing to watch Musashi in his fully realized state, I still feel that this is the weakest film of the three. In addition to the complete lack of Matahachi, the sub-plots with Otsu and Akemi seem a little too superfluous to the drive of the story and they don’t develop too much past what was already seen in Duel at Ichijoji Temple. I still enjoyed the film immensely, but it surprised me that it didn’t delve deeper into these side characters after building them up so well in the previous film. I did enjoy the arc that Sasaki takes, as the purpose-seeking ronin of the previous film is able to achieve what he sets out to do. The shift in his personality, and the visual depiction of him is wonderful, and encapsulates the tragedy at the heart of this film.

Samurai III: Duel at Ganryu Island is a worthy finale to a very strong trilogy detailing a samurai’s path to achieving true peace of spirit. I highly recommend the whole trilogy to anyone that enjoys Japanese film and 1950s cinema. There is a quality about these films that make them seem almost Western-produced; they feel like John Ford movies set in feudal Japan. So if that sounds interesting, then check them out!

YouTube has no trailer but I found one on IMDB, I just can’t embed it here. So click here if you wanna see the trailer!