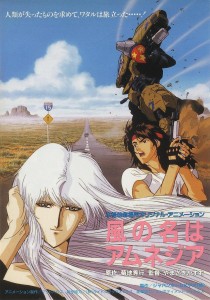 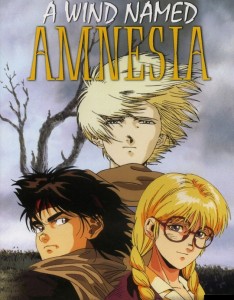 The story is a quest to discover humanity’s true nature. Set in everyone’s favorite hypothetical year of 199X, a mysterious wind has swept across the world and wiped the memory of every human being on the planet. The cause is a mystery and there isn’t much of anyone left to question it as everyone has been reduced to a caveman mentality, unable to even remember speech.

The main character, Wataru, learned how to talk and use modern technology from a boy who was immune to the amnesia. But the boy was sickly and died, leaving Wataru alone on a quest to see what has become of the world. Along the way he meets a mysterious woman named Sophia who can also talk, and has strange mystical powers. The two team up on a journey across the United States.

At this point, the story becomes a meandering affair as their only real goal is to discover human nature along the way to New York. With such a vague and ill-defined agenda the film starts to drag. Making the premise of your story such a large and important question that has defied definition for millennia means that you need an equally big answer, and unfortunately Amnesia just doesn’t have much to say about the human condition. There are some big revelations about the amnesia and what has happened to the world, but the film is more focused on human nature, which leaves it feeling very inconclusive.

Watching Wataru and Sophia interacting with the brain-dead masses just couldn’t hold my interest. There are some cool sci-fi concepts scattered through the film, but they are so short that they don’t get enough depth for a compelling treatment.  They felt more like small episodes, and they didn’t add up to anything. Maybe I’m missing the grand point of it all, and some crucial facet of the story slipped by me, but I was just bored through most of the film.

It does break things up with a deranged police robot (curiously enough, designed by Yoshitaka Amano) that chases the pair across the country like an overachieving Terminator, but even these scenes, cool as they may be, soon became tiresome rather than exciting. Every time it showed up it made me realize that it was going to take even longer to get to the point of it all.

If you like thought-provoking and intellectual drama, then you might find yourself enjoying A Wind Named Amnesia, but for me the payoff just wasn’t there. If there was a significant message at the end, I might have considered it worth watching, but the inconclusive ending leaves you without any important answers, and leaves the film without purpose.