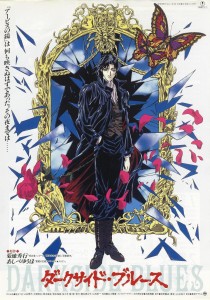 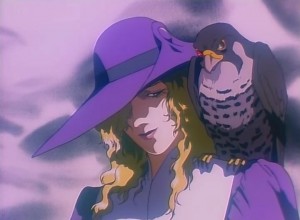 His dark and mysterious nature makes him feel very similar to another of Kikuchi’s characters: D from the Vampire Hunter D series. But where D’s strange and unexplained powers made him a more compelling character, Darkside comes across as boring and confusing. Part of it is the sci-fi setting which implies explanation, making Darkside feel out of place. But I think the bigger issue is the directionless plot which only adds to the confusion. The film needs something to anchor it with a purpose, but Darkside Blues has nothing.

Despite being the title character, Darkside abdicates his central role to the people who actually care about things. But the other main characters are a pretty lazy bunch, too. One of them is a girl who leads a gang in town, but other than having a crush on Darkside, she doesn’t have much of a goal in life. The other woman is a former nurse with a tragic past who really doesn’t want to get involved in things. None of these people are compelling enough to make a story out of.

The only character that seems to have some determination is an anti-Persona terrorist that flees into the area. He could have been the main character, but he gets too little attention to hold up the film by himself. His exploits seem more like an oversized subplot than the real story, so it comes as a disappointment when the movie’s focus turns out to be his story. Of course the fact that we can’t tell this until the end is a major flaw in itself. The other characters help him along out of the goodness of their hearts, and thus get mixed up in the battle as Persona sends out cyborg assassins to kill the terrorist, which leads us to the few fleeting moments where the film shines.

The action is very short but sweet, and contains a lot of fun elements. The enemies don’t have the same level of creepy inventiveness that other Kikuchi adaptations have, but they’re still cool enough to make things interesting. Certainly the guy who deflects rockets with his pocket knife is pure gold. Had the entire film been focused on these encounters I would have had a much more enjoyable time regardless of befuddled storytelling. Sadly they were nothing more than the bright spots in an otherwise drab and uncoordinated story, where even the main characters are superfluous to the plot.

A larger focus on the terrorist’s motives and goals could have made for a much better film, but it keeps treating him as a minor character. Instead it delves into the other characters but never goes deep enough to give them any purpose. The plot can’t make up it’s mind where it’s going, the mysterious elements only come across as confusing, and it feels like there is no conclusion at all. I’m afraid a few bits of cool action can’t make up for the flaws that saturate this film.