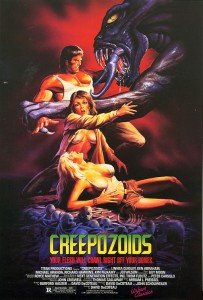 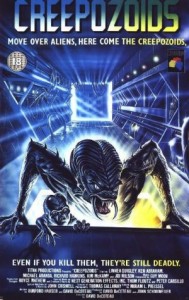 For those that have seen Dreamaniac (or read my review from a couple years ago), please don’t let that dissuade you from checking out Creepozoids. It’s a ridiculous improvement in every way over Dreamaniac, so much so that it’s nearly unrecognizable as the same director. It’s hard to nail down exactly why it’s so much better: maybe it was the increased budget; maybe it was the fact that this one was shot on 35mm instead of VHS; maybe it’s that Creepozoids actually has a script/story. Whatever it is I’ll take it, as Creepozoids is pretty fun in spite of its many flaws.

The acting is far from the worst I’ve seen in a low-budget horror film, but the performances are definitely not going to draw anyone into the film all that much. The only actor I recognized was scream queen extraordinaire Linnea Quigley, although after looking at the IMDB listing I instantly realized that the other girl was none other than B-movie actress turned porn superstar Ashlyn Gere. She also starred in DeCoteau’s Dreamaniac, so they must have had a good time filming that one, no matter how shitty the end results were. I guess you remember the guy that made you take a dude’s head off with a drill. 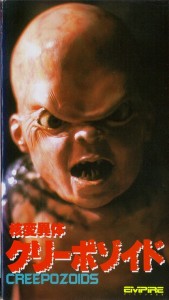 What really makes Creepozoids a good time are all the FX sprinkled throughout the film. None of them are especially great, except maybe one head deterioration, but their fairly constant on-screen presence keeps the movie moving. The film’s structure is your standard “people stuck in a location” horror film, with all the requisite scenes of couples sneaking off to take showers together and a triple helping of people crawling through vents to investigate strange noises. I don’t know about you, but if I heard some gnarly shit coming out of the vent, my first instinct wouldn’t be to dive head first into the goddamn thing. I guess that’s why I’ve never been a horror movie character.

Due to the fairly standard nature of the proceedings, the film does drag a bit during the middle section. The story is interesting and there is a bit of mystery as to what exactly is going on for a while, but because it’s all been done before in better films such as The Thing and Alien, it’s a little hard to sit through without losing interest at some point. Where the film truly shines though is in the final act when all hell breaks loose. Giant rats assault the female characters while the mutant monster is out in full force, rampaging through the fortified government facility and hunting down the male characters with ease. But even these moments aren’t when Creepozoids truly turns the corner into brilliance. No, it’s the moment when you think the film is over, when the mutant lies presumably dead on the floor. Suddenly, the body trembles and shudders with life, but instead of slowly standing and brushing itself off, a fucking mutant/human hybrid baby emerges, covered in acid and filled with the desire for blood. The ensuing fight between the final human and the acid baby isn’t everything you might want it to be, but just the fact that the film delivers something as fuckin’ insane as this is enough for me to thoroughly enjoy the final act of the film.

David DeCoteau went on to be one of Full Moon’s most prolific and successful directors and it’s easy to see why with a film like Creepozoids. The improvement from his previous film Dreamaniac is like night and day, with DeCoteau proving that he’s capable of telling an interesting, if overdone and clichéd, storyline. His shot selection leaves something to be desired, but as a second feature film from a low-budget director, this is pretty damn good. Fuckin’ acid baby, man, I just can’t hate too much on a film with an acid baby.

Next week I’ll be back at the Josh Kirby grindstone with the fourth entry (of six), 1996’s Josh Kirby… Time Warrior: Chapter 4, Eggs from 70 Million B.C.! Wish me luck!