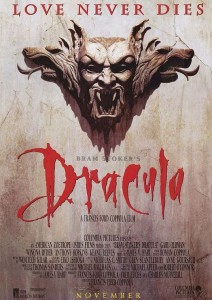 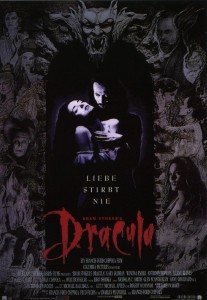 Now for all its “Bram Stoker’s Dracula” pretense, the thing that really defines this version of Dracula isn’t even in the novel! I am, of course, speaking of the integral romantic elements between Dracula and Mina, brought to life most effectively through the use of the bookending scenes in the castle chapel. I love both of these scenes, and even if they aren’t Dracula canon, they are perfect for this film. The opening scene never fails to grab my attention and excite me, as it sets up Dracula’s tragic tale wonderfully, and the final scene always brings me close to tears. But focusing mostly on the romance also leads the film into its worst moments, otherwise known as the second act.

During that middle section of the film, Dracula is mostly just looking suave around 1890s London and seducing Mina. That is, when he’s not in the form of a human wolf and taking advantage of her friend Lucy! Van Helsing is also introduced during this section, and even Anthony Hopkins can’t save this sagging middle act. I have to say, I never noticed this flaw during the first 10–15 times I watched the movie, so perhaps it’s more my familiarity with the film than any actual flaw on its part. In any case, I found the middle slow and kinda boring, while at the same time continuing the near flawless technical execution on display throughout the film. 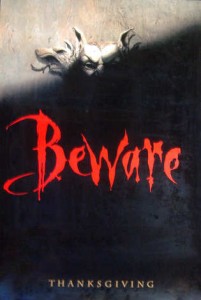 Literally every aspect of this production is of the highest order: sound design, makeup FX, acting, cinematography, everything; it’s simply one of the most lavish and enveloping Gothic productions to date. I will forever be enamored with this movie’s visual style, evoking dark fantasies of the night through old-school camera tricks and perfect editing. OK, I can’t wait any longer: the makeup FX in this movie are some of the best to ever grace the screen. Gary Oldman is transformed in ways that could’ve easily ventured into the cheesy, but the FX are so well done they only pull you further into the tale. And it’s a testament to Oldman’s power as an actor too, as he’s able to grab hold of the audience’s throats with a deep, rewarding performance no matter how much makeup covers his face. Even in the full bodysuit of the man-bat, Oldman shines through and the audience never falls behind. In this film, Dracula inhabits a number of drastically different forms, and with a lesser actor it would’ve been a hard sell. Oldman is a master of his craft, though, and this is arguably his finest performance. Or if nothing else, it’s my favorite performance of his without question.

Coppola’s direction is also incredibly inspired, using the inventive camera tricks of old to sell the vampire’s tale. And because of this, the film’s FX still look incredible, hitting with the same force and intensity as they did upon release. I think anyone who’s been brainwashed into thinking that CG is the only way to go for FX should definitely check this one out again. Throughout the film, Coppola also uses slick transitions to bridge the scenes, such as a peacock’s feather slowly dissolving into a first-person shot of a train exiting a tunnel. Some might see these as gimmicky or easy, but I love them and they feel like yet another call back to a bygone era of cinema reinvigorated and repurposed for the modern film. I haven’t seen any of Coppola’s films after this, but I think it’s safe to say that Dracula is his final masterpiece. I mean, maybe Jack is a lot better than I think it is, and maybe he’s got a humdinger brewin’ right now, but from the looks of it currently (and based on popular consensus), this is his last great film.

I also can’t finish this review without mentioning Wojciech Kilar’s incredible score for the film, which has been one of my favorite scores since the film’s release. It just doesn’t get any better than this for dark, creepy, Gothic music and it’s a huge reason why this film succeeds as well as it does. It gets used all the time in “dark-themed” trailers, and it’s also a favorite writing music of mine.

In a world full of vampire films, I think it says something that no one has attempted to mount a theatrical re-telling of the novel in the 20 years since Bram Stoker’s Dracula was released (although it could be argued that Argento’s most recent film, Dracula 3D, a revisionist take on the story, is just that). I loved Bram Stoker’s Dracula in 1992, and I still love it now. It has tempered a bit, but the fire still burns and Bram Stoker’s Dracula is a hauntingly beautiful, Gothic version of the classic tale.