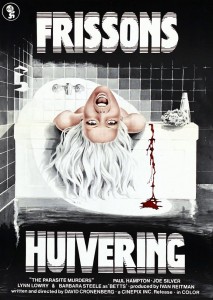 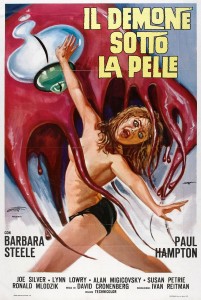 So as I led with what I was disappointed with, let me switch gears to what I liked. The premise is brilliant. It shifts a bit after a key piece of information is uncovered, and this kind of killed the most interesting part of the premise for me, but regardless it’s still a damn good idea to base a film on. I won’t spoil it here, as you should really just see the movie, but let’s just say that it involves penis-like parasites implanted in a human host on purpose. This doesn’t go as planned — No shit! — and this eventually leads to the sex-crazed part of the film that I didn’t care all that much for. That’s not to say that there’s not a lot of great stuff peppered throughout that section, but it does feel like Cronenberg just kind of gave up trying to tell a story.

In a way, he did, just as the parasites infected the apartment dwellers and forced them to give up every societal restriction. You could argue that the film’s structure is specifically designed to mirror this change, and I’m almost positive that’s the case here, but even if it’s by design I still found it a bit boring to sit through. I don’t know what it says about me when these wild thrills designed specifically to titillate and engage a hungry audience only make me yawn, but I think it’s just a case of it being the wrong type of B-Movie juice for me. I’d much prefer a third act filled with non-stop scenes of parasites infecting humans and then murdering them from the inside or some such, but I’m sure there’s just as many people who would rather have the chaotic, building-wide sex orgy instead. To each his own, I suppose. 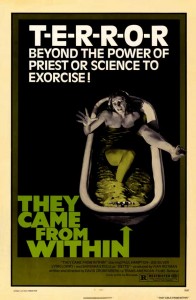 It does end on a ridiculously strong note, and one that I think cements the fact that the film’s structure is all by design. It’s here that despite all the trashy elements of Shivers, Cronenberg asserts himself as a confident, new director bursting onto the scene like a parasite climbing up the drain and burrowing itself into the vagina of a bathing woman. Hmm… perhaps not the best analogy to make, but I’m going with it! Cronenberg also shoots the film with great style, making me cringe, squirm and stomp my foot for a good portion of the film’s first half. Despite my issues, I can’t dismiss the fact that Shivers is quite impressive for a first feature. I haven’t yet seen anything he did between this and Scanners, but in Shivers I can definitely see the beginnings of the careful, and beautiful, composition seen in Scanners.

The FX are limited to many squirming parasites and not much else. The parasites are creepy and effective, but whatever fake blood they used on the humans looked pretty awful. It’s bright red, it looks like cheap paint, and it’s got to be one of the biggest flaws of the film. It’s shit like this that makes people not want to watch old movies. I know that obviously fake blood was the norm back then, but why? Surely people had seen real blood before, and they could distinguish the difference between it and horrible fake blood. I wonder if it had to do with the censors.

If you’re down for a trashy, creepy, squirmy, parasite-filled piece of work from one of cinema’s most celebrated genre filmmakers, then definitely give Shivers a go. It’s overall not a very good movie, and it features some really questionable acting at times, but it’s a lot of fun if you’re in the right frame of mind. I usually come away with some reservations, but I always enjoy Cronenberg’s work when I do see it. I look forward to checking out some more of his early, trashy work.