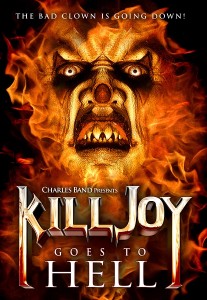 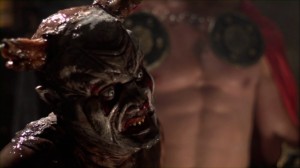 Trent Haaga is really owning the role of Killjoy at this point, and his performances seem to get better and better with each movie. The one in Killjoy Goes to Hell is so perfect that I ceased believing it was Haaga in makeup, and actually believed that they had summoned a demonic clown from the depths of hell to play in their movie. Really, I can’t say enough good things about his performance. The rest of the cast is also surprisingly good, which goes to show that Full Moon put the money in to make it as good as they could, and that Lechago knows what he’s doing behind the camera.

Lechago’s direction is vibrant and serves the story well. It took me until about mid-way through the movie to realize that this was yet another of Full Moon’s “one room” movies, although this one does have quite a few other areas that augment this and draw your attention away from that fact. But even if a good majority of it is in a rather warehouse-like courtroom of hell, the set dressings and design are more than enough to make you believe we’re in another world. The impressive CG elevator and the “core of the world” Hell establishing shots, also go a long way in taking you on a journey, and were  some of the most impressive aspects of the production. Due to this visually expansive window dressing, Killjoy Goes to Hell actually feels like a real movie, as opposed to the thinly veiled softcore that many of Band’s recent films trade in.

I do have a couple of issues with the movie, but they’re both minor and shouldn’t get in the way of your fun if you decide to gamble with your $1.20 at RedBox. First, Killjoy Goes to Hell is not a horror movie for the most part. There are sections where it resembles a horror movie, and certain scenes features some fun gore that Americans would never tolerate in a non-horror film (just look at the lukewarm reception to Super), but for the most part its sights are set directly on comedy. I wasn’t having a laugh riot or anything, but I was smiling and enjoying myself throughout, so I can definitely call Killjoy Goes to Hell a success. 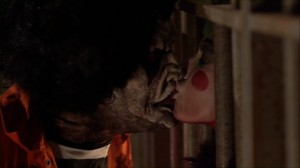 My second issue is that about an hour into the film it felt like it lost a lot of steam. Don’t get me wrong, there’s a lot of great stuff (some of the best of the movie) that happens in that final half hour, but I was getting tired of the movie by then. To be honest, though, I dozed in and out of this section, and then immediately watched it again without falling asleep and it felt much better, so perhaps it was my experience coloring the film. In any case, you can’t get away from the fact that the large-scale brawl that leads into the film’s ending is pretty fucking awful. Lechago does wonders with his limited budget, and he knows how to film a fun movie, but action is definitely not his strong suit. It doesn’t bug too much as it’s a rather quick scene, but scenes like that remind me that filming action must be harder than a lot of the genre greats make it seem.

Killjoy Goes to Hell is easily the best Full Moon film since the last Killjoy, and any fan of Killjoy definitely needs to check it out. If you liked Part 3, this one will whet that appetite for even more clown goodness… I mean, badness, and hopefully Killjoy 5 will return to the horror/comedy roots as opposed to the pure comedy of Killjoy Goes to Hell. I don’t know that non-Full Moon fans will get anything out of this, but if you were dipping your toes into Full Moon’s recent offerings, the Lechago Killjoy films are probably the best place to start.

Next week on Full Moon Tuesday, it’s one I and many other Full Moon fans have been waitin’ a long time for, the first released segment of Full Moon’s unreleased 1987 anthology film Pulse Pounders! That’s right, next week I’ll be reviewing Jeffrey Combs and Barbara Crampton in The Evil Clergyman! I’m so stoked!