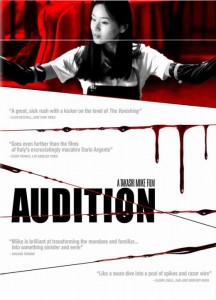 Wow. Y’know for a movie with this much hype built up around it, and the fact that I kinda knew the ending in a vague way, I did not expect to be as blown away as I was by Audition. Truly one of the greatest modern horror films, Audition slowly unfolds its tale and pulls you into its story with likable, compelling characters. You could say that the first half is too slow, but that would be missing the point. The slowness is part of the film’s character and absolutely why the third act hits as hard as it does.

The film opens with Aoyama at the bedside of his dying wife. His son arrives with a get well present for his mother, but he’s too late. Seven years later and Aoyama is lonely and still overcome with grief, so his son suggests that he get out and date again. He does, kinda, but to tell anymore would betray the greatness of the film. Seriously, just watch it. It’s definitely the type of movie where knowing much at all will detract from the experience, but know that if you like non-standard horror, you’ll probably enjoy this. So come back after you’ve seen the movie, as I’m not actively trying to spoil anything, but even my vague descriptions of things will be too much. 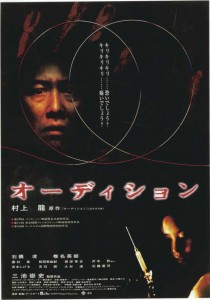 This is only the second Miike film I’ve seen (13 Assassins was the first), and once again I am floored at how impressive his films are. I had an idea that Miike had adopted a quieter, more meditative pacing for his transition to the samurai genre, but instead that same pacing and methodical delivery of information was present in Audition. It works perfectly for this film, slowly building up the tension and the audience’s wondering desire to know just what is going on, and then paying off immensely when the third act comes along and cranks up the sadism way past 11. The camera doesn’t move quicker, nor does the editing, so even the directing feels sadistic in these moments. This, of course, adds an immense amount of squirms and shocks that horrible, modern filmmaking would have never allowed.

What truly sets Audition apart for me is the use of dreams. There are many throughout Audition, but the pièce de résistance comes after the film ends, when the question of whether or not some of the non-dream scenes were actually dreams. Audition is a movie to be analyzed and re-watched, as its mysteries definitely do not reveal themselves on first glance. That’s not to say that the film is impenetrable or anything, quite the contrary, but there is a lot going on that I’m not completely sure about. In this way, Audition reminds me of some of my favorite books by Phillip K. Dick, who consistently played with shifting realities to put his characters and his readers on guard. This may be a horror movie, and it may be sadistic and hard to watch at times, but it’s impressively well-constructed and should be lauded as one of the great films of the modern era.

The dreams themselves suggest that the film is more about Aoyama’s perception of his newfound love than anything she is actually doing. Maybe. As I said before, I’m unsure completely what really happened, but this is the beauty of Audition. The dreams reveal that what we initially saw of the two characters meeting was not the whole truth, or that Aoyama’s feelings were coloring our own voyeuristic consumption of them. This is perhaps one of the most effective “place you inside a character’s head” movies of all-time. It’s all subtly done to perfection, which is ironic in a film that pushes cinematic sadism through intense, over-the-top visuals into the next realm. But that’s the beauty of Miike: he’s so confident and sure a director that he deftly works with both sides of the palette, using everything at his disposal to craft a unique, incredibly unforgettable work. I’ve seen two films from Takashi Miike, and I’ve given both four stars. I think it’s safe to say that I’m a fan.