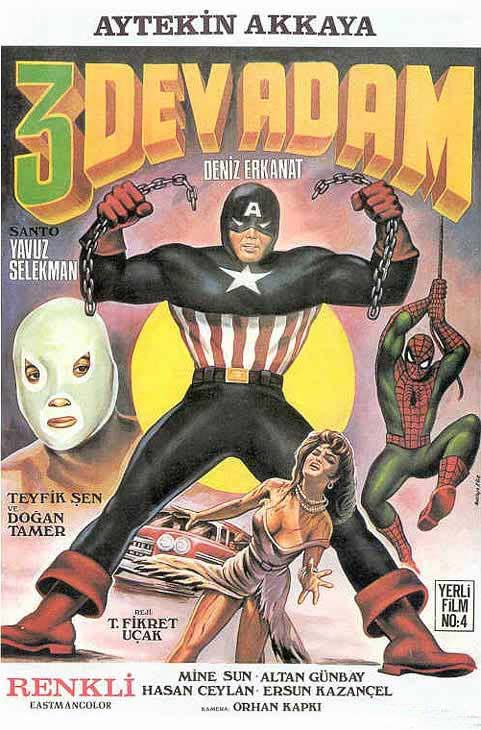 AKA Captain America and Santo vs. Spider-Man, Three Giant Men

It’s about time I stopped dicking around here at Silver Emulsion. Five months in and I still ask myself why I waste away lonely nights writing about cinema’s bottom-fed rejects. Oh no, not this time folks. This is a respectable medium and I intend to present it as such. It’s high-time to bring some dignity up here in this bitch, which is why I am throwing down the gauntlet and finally earning my keep as a respectable film critic with my long-awaited review of Ingmar Bergman’s contemplative study of emptiness in old age, Wild Strawberries. T. Fikret Uçak’s unauthorized Turkish superhero / Mexican wrestling mash-up, 3 Dev Adam.

The rules of logic do not seem to apply in the world of Turkish cinema. Neither do the laws of copyright holders, I guess. The only thing intellectual about the intellectual property in these films is how many long-protected trademarks you can shamelessly cram into 80 minutes of celluloid in order to put asses in theater seats. Some of you may be familiar with the infamous Turkish Star Wars, a film that had no problem sandwiching sections of douchebag-extraordinaire George Lucas’s space-epic in between lo-fi shots of old Turkish guys punching rocks out in the desert. 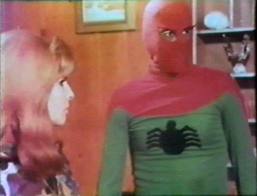 3 Dev Adam carries on this proud tradition by tossing ghetto-fied versions of Spider-Man, Captain America, and lucha libre legend, Santo into a freaky mix that defies rational explanation. Yeah, if you’re anything like me, this instantly seems like a dream come true. Being a longtime comic book fan, seeing two of my favorite superheroes team up with Mexico’s greatest badass is on par with some suicidal jihadist’s greatest gold and virgin-filled fantasy. The only problem is that filmmakers in Turkey seem more interested in getting these guys up on the screen than they do in accurately portraying the characters. Clearly, getting a firm grasp on the nuances of a character such as Spider-Man was the last thing on the minds of these guys. How off the mark were they? Well, for starters ‘ol Spidey doesn’t fight crime… as the film’s main villain, he is the crime. He doesn’t shoot webs either, but has no problem shanking mafia hitmen with a switchblade. Yeah, your friendly neighborhood Spider-Man is a real sadistic asshole in this film. From the moment we see him on-screen he is burying a helpless woman up to the neck in the sand and tearing her face to shreds with a boat engine’s propeller. If that doesn’t set the tone, I don’t know what could. 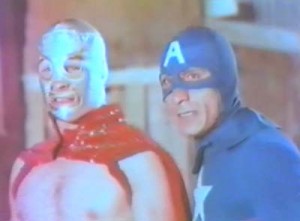 Captain America and Santo are called in from the Americas to deal with the serial-killing, money-laundering Spider-Man, and they don’t fare too well in the accuracy department either. Cap doesn’t haul around his trademark shield, and does most of his crime fighting in his butterfly-collared street clothes. Santo prefers to strut around the streets of Turkey unmasked, wearing obnoxious shirts with red, frilly shoulder-pads. There are two things wrong with this…

1)      Santo should NEVER be unmasked. Period. I think we covered this before.

2)      If he was ever unmasked, I’m pretty damn sure he wouldn’t be a dead-ringer for a steroid-charged version of Larry from Perfect Strangers.

Despite these glowing inaccuracies, these guys get down to business fairly quickly with Cap putting the hurt on a gang of Spidey’s thugs in a chaotic, overcranked frenzy of a fight that begins with him busting through a balsa-wood door, B.A. Baracus style and fighting a bunch of guys as he hangs upside-down on a rope, and ends with him chasing down Spider-Man in an abandoned graveyard. Santo meanwhile takes on a bunch of sideburned karate guys in Spider-Man’s headquarters / training dojo while searching for incriminating evidence. 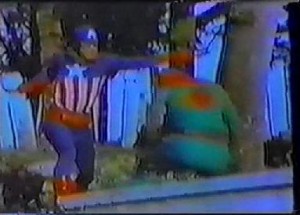 When Cap is forced to explain to a Turkish agent why they prefer to wear costumes and masks while pursuing Spider-Man, Cap drops the science in a priceless line of dialogue:

“Spider is a child-minded lunatic. He always wears a mask. When he sees somebody else wearing a mask, he wants to destroy them. My special outfit is bulletproof.”

The fights get wackier and wackier until at one point we see Santo picking up a henchman and swinging him up and down like a club, using the guy’s body to beat enemies over the head with. On the other side of the coin, Spider-Man grows more and more deranged in every scene he’s featured in. Sneaking into a rich woman’s home, Spidey steals a priceless statuette, but not before strangling the bathing woman with a shower hose. In a similar themed sequence, he finds a saucy couple making love in a steamy shower stall, armed with nothing but a long metal rod, he skewers them together, skish-kebab style while blood whirls down the drain in a piss-poor homage to Psycho. In his most memorable moment however, Spider-Man suspects one of his own men of being a government informant. He takes the man down to his secret Spider-Dungeon and hooks one end of a clear tube up to the man’s face while feeding two hungry rats into the open end. The rats make their way down the tube and eat away at the suspected informant while he screams for mercy. 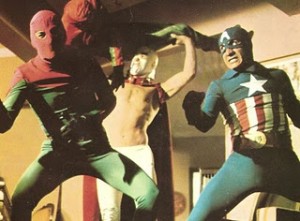 About three-quarters of the way through, Spider-Man somehow discovers the ability to clone himself. At first, this was extremely amusing. Santo and Cap have their hands full beating the hell out of a bunch of Spider-Clones, while the real Spider-Man gleefully hops away on the rooftops of neighboring buildings. By the end of the film however, it’s just fucking irritating. When Cap and Spidey duke it out in a climactic warehouse fight, Cap punches Spider-Man back into a piece of heavy machinery which plunges down, instantly decapitating him. A coup de grǎce more satisfying than that, you’d be hard pressed to find. Only this time, yes, it was just another Spider-Clone. Cap literally has to kill Spidey another three or so times before he finally cuts that silly shit out and dies in a much less spectacular fashion.

Yeah, this is what you’re in for when you brave the savage, Mediterranean waters of Turkish Cinema. Editing is all over the place, jarringly shifting scenes or camera angles with neither rhyme nor reason. It only helps to lend itself to the already bizarre tone. The blatant misuse of music is just as bad as the misuse of other intellectual property in the film. These guys throw everything into the mix from greasy jazz organ, Shirley Bassey’s Diamonds are Forever, the theme from The Master of the Flying Guillotine, out of pitch Frank Sinatra songs, to Carlos Santana. It’s almost like somebody set an iPod on shuffle while beating it relentlessly with a hammer.

Despite it all, you will be entertained. That is a guarantee. The freedom this film exhibits may well be unmatched in movie history. By having absolutely no rules, respect, or dignity it almost defines itself as its own unhinged masterpiece. It’s crude, it’s ugly, it’s perverse… but in a way, it’s oddly inspirational.