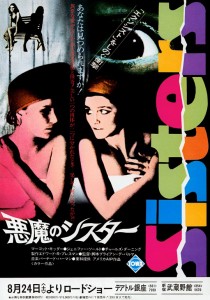 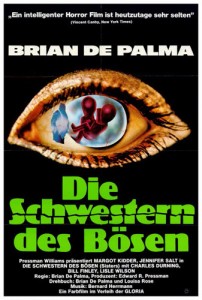 In any case, De Palma proves here that he’s a worthy Hitchcock impersonator. The general feel of Psycho and Rear Window permeate the first half of the film, leading up to one of the most impressive sequences of split-screen I’ve ever seen. Split-screen is almost always gimmicky and over-the-top, but De Palma uses it in Sisters to tell his story. The scene could have easily been told without it, so that suggests De Palma is specifically trying to inject some flash into the picture, but that would be missing the point. The split-screen gives the viewer a couple of perspectives on the action, specifically in the moments when it’s first used, and this perspective increases the dramatic pull of the scene infinitely. What would have been a fairly average scene leading into the next, becomes an unforgettable section of film. No matter how gimmicky or flashy it may be, that’s simply great filmmaking.

Special mention must also be made of Bernard Herrmann’s score. I’m a huge fan of his work in general, and especially his work on Hitchcock’s films, so I am somewhat biased. Regardless, the score manages to evoke shades of his previous work: the dream-like quality that Vertigo‘s music holds, the intensity of Psycho‘s. It also feels modern in spots, when the lush string section gives way to what sounds like a synthesizer, something I never thought I’d hear in a Herrmann score! The music intensifies the movie greatly, as any good score does, but in a way it also aurally recalls the Hitchcock style of old, while De Palma is also actively creating reminiscent visuals. It’s an odd sort of homage/revisionist version of the thriller, and I honestly really enjoyed it. I can see where Tarantino draws a lot of inspiration from this era of De Palma’s work.

It’s rare for a film nearly 30 years old to enthrall an audience in the same way it did audiences of its time, and Sisters is no different. But while the passage of time may have diminished the impact of Sisters a bit, it doesn’t impact the quality of the filmmaking at all. Sure, impatient viewers will find it hard to sit through the entire film, as it is slow (per usual for the period), but careful viewers with a desire for a good thriller should be adequately thrilled. I’m definitely interested in checking out more of De Palma’s work from this time in his career.