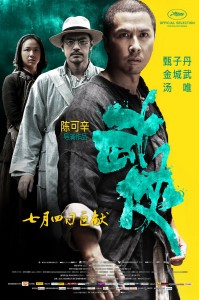 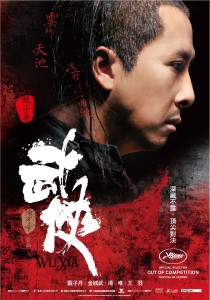 I’m being vague because the central plot of Wu Xia is a mystery. After the thugs’ rampage on the store, a detective (Takeshi Kaneshiro) is brought in to investigate what happened, and he immediately begins to suspect that things are not exactly what they appear to be. His investigation is absolutely fascinating, bringing in forensics and all kinds of inventive reasoning that gives you new insight on the scene that you just saw. And instead of just hearing him break down what he thinks happened, they cut directly to the fight scene, but this time Kaneshiro is looking on from an advantageous angle, actively figuring out and piecing together what happened, just as the audience is.

This investigation eventually leads to a revelation, and then the film shifts tone a bit to become a more traditional action/wuxia film. I’ve seen a few reviews that point this out as a weakness of the film, or a sign that director Peter Chan didn’t know what type of film he wanted to make. This is preposterous, as the shift is clearly defined and telegraphed throughout the entire film. With the mystery fully uncovered, not transitioning to action at this point in the film would be like having everyone over for a card game, getting everything set up and all the cards dealt and then deciding to instead skip through the tulips with a bonnet on. It would make no sense, and the transition to action is exactly what makes the film work completely.

It’s all in the title; Wu Xia is a throwback to the wuxia storytelling of Chang Cheh, Ni Kuang, Lo Wei, Ho Meng-Hua and all the other awesome people who populated the Shaw Brothers studio. The subtly of the supernatural elements here are unexplained and perfectly reminiscent of a modern interpretation of their 1960s counterparts. In a film this realistic, it might seem odd to see a man deflect sword blows through years of conditioning, or to see a simple shout reverberate throughout the surrounding forest, but this is exactly the type of shit a wuxia film trades in, and I loved every moment. These moments recall the heightened martial world of the Shaw Brothers, or the wuxia novels they were frequently based on, but as an homage to early Shaw films, its focus is on quality storytelling and not loads of fights or wild supernatural forces. I also loved that they used a bit of the storyline from Return of the One-Armed Swordsman for their jumping off point, although the two films share almost nothing else in common.

That’s not to say that the film is without flaws, as Donnie Yen’s character has a couple of things in his arc that definitely make him a questionable hero. He becomes hard to like at times, and I question the decision to tell certain parts of the story as they did, but overall it’s a minor point that really doesn’t get in the way of the fun. There’s also another moment that seems forced and really comes out of nowhere, but given the state of the character in that moment it kinda makes sense, and his later justification for it sounds good in a chivalrous swordman sort of way, so I can get behind it even if the specific moment feels like they’re trying too hard to draw parallels to The One-Armed Swordsman. 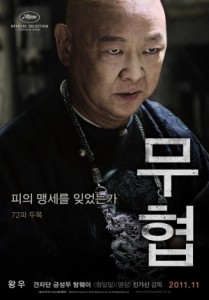 Wu Xia isn’t heavy on the action, but when it comes around, it’s nothing short of awesome. It could be a little better shot (there are too many close-ups), and they unnecessarily drop frames to make it seem modern and a little faster than reality, but overall they are ridiculously fun scenes of martial violence. Coupled with the fact that they come after a lengthy first half of pure tension building, they hit hard. This first true fight scene is my favorite of the film, although the final battle holds a special place in my heart as it features the comeback of Jimmy Wang Yu, star of The One-Armed Swordsman and many other early Chang Cheh films.

I’m hesitant to say that this is Wang Yu’s greatest performance as I haven’t seen all of his movies, but Jimmy Wang Yu is absolutely fantastic in Wu Xia. He commands the screen in his limited time on it, grabbing your attention by the throat and then squeezing as hard as he can. Wang Yu plays the ruthless villain with a subdued rage and a menacing calm. He was never the Shaw’s greatest actor, but he aged like fine wine, delivering one of the best performances of his career. This was his first movie since 1993, but if he feels like working, I’m sure he can book some good gigs solely based on his work here.

Wu Xia also features some computer FX, which would normally be something of a deal-breaker, but get this: in Wu Xia the CG is used subtly and in total service of the story. Wha? Seeing CG used effectively and not as a pure gimmick was so refreshing, and it added a lot to what they were trying to do with Wu Xia. It would have never been possible to deliver the detective section of the film without the CG, so I totally approve of its inclusion. It also helps when the film has such amazing cinematography to keep my mind active. Wu Xia has to be one of the best looking Hong Kong films of all time, with such rich colors and wonderful composition; the cinematography is as much a star of the movie as is Donnie Yen.

So yeah, I loved Wu Xia. Certain elements which are too drawn out and a few character issues aside, Wu Xia is a standout film of the modern era of Hong Kong. I feel like I’m exactly the type of person this one was made for, as I’m working my way through the Shaw catalog, and as such, your mileage will almost assuredly vary. But if you go into this one with the right mindset and expectations, I honestly don’t see how you couldn’t enjoy it if you enjoy a martial arts film with a good story. It should also be noted that it will be under the title Dragon when its US release comes around at the end of November. This makes it sound more like a modern homage to Bruceploitation than anything else… Oh well. Anyway, I highly recommended it.