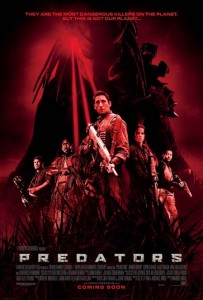 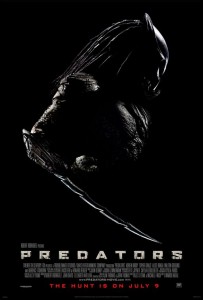 Another big problem I have with the film, and this ties into the previous point, is that the Predators don’t really do anything in this movie until the end. In the first big action scene, instead of coming after the group themselves, they send in a pack of alien dogs. They’re CG for the most part, but I enjoy their design. The scene I can take or leave, but the FX work is well done. Then we’re fed details about another alien race also in the jungle with the Predators, who I call the “cockroach aliens.” One of the cockroach guys eventually attacks the humans late in the movie, and a character remarks about how the two species (Cockroach & Predator) have battled for centuries over this land. Bor-ing, especially because it’s a throwaway line instead of a real scene that means anything. Later still, the group finds themselves trapped in a derelict space ship and the movie becomes a corridor horror film, like Alien, for about five minutes. All this adds up to the Predators not really being predators, and that really bugs me. Sure, there’s a lot of cool moments sprinkled throughout, such as the ludicrous but very enjoyable samurai vs. Predator fight, but it’s not a Predator movie. So if we’re stuck with the Predators sending dogs and other aliens to do their killing for them, then at least the filmmakers could have the decency to show us what the Predators were doing with all their free time. I imagine them on the beach in folding lounge chairs, sipping fruity drinks with little pink umbrellas, but you might prefer them wearing green visors at a smoky poker table. Feel free to share what you think the Predators were doing with their time in the comments.

All this led me to think about the Predators in the film as brethren to the creatures featured in the previous films. As I’ve stated before, the Predator in Predator is the ultimate badass, focusing on stealth and only a few weapons. He works efficiently and is a model Predator. The Predator in Predator 2 is clearly a cocky young Predator looking to make a name for himself through his use of an array of awesome weapons, and his reckless “let’s attack a crowded subway” mentality. So then naturally the trio of Predators seen in Predators are the dumb, “we aren’t good enough to hunt alone” Predators. Not only that, they have to hunt in a controlled environment, and they’ve somehow missed the fact that Laurence Fishburne has alluded their best efforts for some time. Definitely not the brightest group in the clan to be sure. 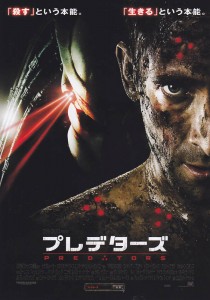 Oh, I have another problem. Because the focus is no longer on the hunt and the dread it causes, the gaps are filled with lots of completely worthless character interactions between the humans, complete with a stupid twist at the end. Again, all this does is take the focus away from the Predator hunting you really came to see. Arnold and Carl Weathers may have had a troubled past together, but that shit played out in subtext and suggestion. It just boggles my mind when people get hold of a franchise and then proceed to prove that they have no clue what made the original so good. This is my opinion, of course, and many people loved this movie, but it just doesn’t sit right with me.

I mentioned enjoying Predatorsmore this time around, but so far all I’ve done is bitch. Well, I really like the first half hour or so. Everything up until the planet reveal is really good. They build the tension up well, and do a good job of keeping the pace tight as the group gets together and then begins to uncover the mystery of where they are. The editing is also nicely done, with handsome cinematography to complement it. It’s overall a very nice looking film, albeit one that’s much too modern looking for my tastes. Laurence Fishburne is also very good, and I wish someone else died first other than Danny Trejo. His death might actually be the point when it begins to go downhill, but that could be my love of Danny Trejo talking.

With all the negativity, you might wonder why it’s not lower than two stars. At the end of the day, I don’t think it’s a bad movie. A misguided one for sure, and one that needed a script overhaul and someone to give its Predators a swift kick in the ass, but it’s definitely not bad. For all the problems I have with it, it is entertaining. I don’t get a lot of enjoyment out of it, and ideally I won’t ever be watching this one again, but I can understand someone disconnecting from a long day at work and enjoying the shit out of this. For me, it’s not that type of movie, but that’s the beauty of movies, there’s always another one to satisfy you.