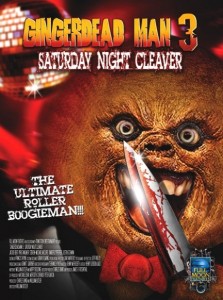 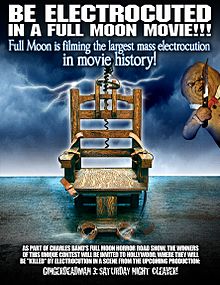 As expected, when we arrive in the 70s, the film shifts from Gingerdead-centric to human-centric, and we are treated to a boring, clichéd soap opera amongst the obvious 70s disco freaks and stoners as Gingerdead Man scuttles along the floor and looks on from around the corner. On top of this, it quickly becomes apparent that this section of the film is based pretty heavily on Carrie, thus making most of the plot twists obvious. While I’m sure someone out there will enjoy the light spoofing of Carrie, I can’t help but be annoyed that Full Moon doesn’t try to come up with interesting storylines for their films anymore. Evil Bong 3 had a pretty good story idea at its core, but that one was submitted by a fan for a contest. Perhaps they should just outsource all their stories to the fans, and coincidentally as I write this Full Moon has just closed another contest of this sort. Let’s hope it leads to a fun movie.

The film is played for laughs primarily and it does have some spots of fun. My favorite was when the owner of the roller rink tells her niece about why she no longer skates. It’s a mixture of 40s stock footage and sepia-tinged material shot for the film and provides one of the best moments of the film. A big reason I like this part is the revelation that comes after, revealing the true behind-the-scenes story of Pearl Harbor. It’s a good moment of clever comedy writing and I wish the rest of the movie shared this quality.

The direction from William Butler is nothing special, but it’s not offensive either. There are moments where the cinematography is too dark and people/objects fade into the backgrounds like the other 2011 Full Moon release Killer Eye: Halloween Haunt. I hope this doesn’t become a trend in their films, as it’s quite frustrating. It’s not nearly as bad as it was in Killer Eye 2 though, probably due to the roller rink setting, so for that I am thankful.

The acting is of equal quality to the shot selection: nothing horrid, nothing great. Newcomer Paris Wagner as Cherry is fairly promising, and I’d be interested in seeing her work in a better film. Jackie Beat (the drag persona of Kent Fuher) is another high point of the film, throwing every ounce of charm she can into the part. She gets rather annoying at times, but realistically she’s one of the few people in this film that I can remember and I just finished watching it thirty minutes ago. So say what you will about annoying, she created a memorable character in a sea of cliches.

As for the Gingerdead Man, he’s actually less annoying in this than he has been in previous films. His one-liners are of better quality (but still fairly shitty) and honestly he’s not in the movie too much so it’s easy to ignore him. His eyes now blink thanks to the wonders of CG and it actually looks great and sells the character as a living, killing cookie much better than before. The full CG running model not so much, but for the budget and the type of film it works well enough. The CG blood on the other hand is pretty awful. I hate CG blood in general, and while some of the kills look pretty good, most of them are just awful. CG blood allows filmmakers to create scenes without any innovation or invention. Gingerdead Man’s gonna shoot a dude in the head? Just have him fall down and we’ll put the gore in later. An absolute revelation for low-budget filmmaking, but at the cost of the audience’s enjoyment. There’s a nail gun scene that would have been a great place for some reverse filming (pulling the nails out of the actors and then reversing the footage in the film), but instead we have an orgy of AWFUL CG blood and nails. I realize they aren’t shooting for realism, and are probably even going for the bad FX as another joke, but it fails on both levels for me.

At one point, about halfway through the film, the Gingerdead Man asks himself (face pointed to the audience), “Where’s the remote?” I asked myself the same question and I can imagine lots of people getting to this point and shutting the film off. Simply put, Gingerdead Man 3 is better than the first film, but not nearly as fun as the second one. Depending on your sense of humor and filmmaking, this one could deliver some enjoyment to the right people, but I’m unsure just how large a group that is. It’s not without its moments, but overall it’s a stinker. Hopefully this will be the last batch of unsatisfying gingerdead cookies I’ll have to sit though. That being said, if you enjoyed the first two, you’ll most likely enjoy this one as well.

Next week, I’m going back to the low-budget 80s with Necropolis!