> Reviews by Author > Will's Reviews > Slave Girls from Beyond Infinity (1987) 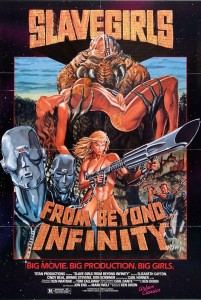 Expectations: Moderate. I love The Most Dangerous Game, and I love cheap sci-fi, so where can this go wrong?

Slave Girls from Beyond Infinity is a film with limited appeal. Basically, if you’ve ever watched a sci-fi film, but wished the protagonists were played by buxom beauties in loincloths, then your search is over. There’s also the niche group of audience members that may have secretly wished for the same buxom beauties in something of a Most Dangerous Game scenario. Slave Girls from Beyond Infinity fulfills both fantasies, but beyond that it doesn’t do much. And if that wasn’t your thing going into the movie, I doubt the movie has the power enough to sway your sexual fantasies into the weird and wild. But who knows, give it a shot!

So as I alluded to: Slave Girls from Beyond Infinity is a science fiction re-telling of Richard Connell’s The Most Dangerous Game. The slave girls of the title are Daria and Tisa, who escape from a prison ship in the opening minutes. They hijack the ship and set out for stars unknown, but instead they end up crash landing on a nearby planet inhabited by an eccentric hunter named Zed and his robot servants. He invites the girls to dinner, where they meet a couple of other shipwrecked people under the care of Zed. This would normally be a seminal scene of the story, where the hunter reveals some sadistic fascination with hunting, but instead it’s just kinda boring. 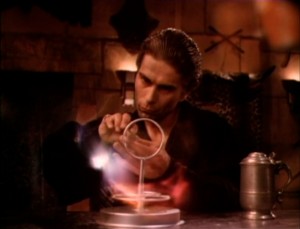 This brings me to the main problem with this one: the direction is just horrid. The crash landing of the ship is handled through a fade-out from the troubled cockpit to Daria slowly and sexually arising from the wet sand of the beach. Huh? I know they can’t show it because of the budget, and I understand that it’s a trashy attempt to inject as much skin and fan service as they can, but at least try to make it somewhat coherent. Whatever, I can forgive them this. But later in the film during the hunting sections, there’s absolutely zero tension. The villain is only hot on their heels when the director feels like it, so the scene has a lackadaisical feel to it when it should be blood-pumping. Oh, and don’t even get me started on the trophy room scene where they don’t even take the time to give us one single close-up on the trophies so that we don’t have to assume what’s going on. Later we do get a better glimpse at some of this, but again, where the scene should be ominous and the revelation alarming, it is merely boring and poorly constructed.

I guess part of my frustration with Slave Girls from Beyond Infinity is that I only recently saw Surviving the Game do it all a million times better. Where Surviving the Game took inspiration from the story and ran with it, Slave Girls from Beyond Infinity takes inspiration and drains everything it can from it before ingesting it, regurgitating what’s left and then replacing everything else with scantily clad women. I know there are people out there that will ask what the exact problem is with that, and I guess if that’s you then you’re the guy who should be watching this one! 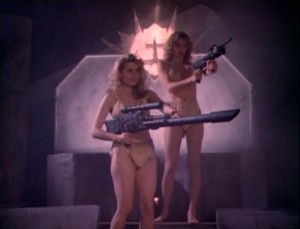 The acting is almost universally awful, with line delivery that’s only a bass line and a cut away from hardcore pornography. Lead actress Elizabeth Kaitan makes her début here, and is fairly charismatic, but it’s no surprise that instead of mainstream success she ended her career with Full Moon’s softcore off-shoot company, Surrender Cinema. The only actor that’s worth anything was our villain, Don Scribner. He kinda has a Christian Bale/Willem Dafoe look to him and he chews up the sci-fi castle set as if he hasn’t eaten in weeks. He’s great, and honestly one of the few things that kept me awake and interested in the film, so that’s gotta be worth something.

If it wasn’t already apparent, Slave Girls from Beyond Infinity is pretty trashy. It could be a lot worse, as the trash here is more harmless trash than anything really offensive. There are a couple of rape scenes, though, and those both have the villain laying a mean fist on the face of the girl in question. For a movie that seems focused on having fun, these scenes feel out of place and completely unnecessary. There’s some revenge for these acts that happens when Daria unexpectedly busts into the room, clad in golden gladiator garb, and saves Tisa, but because of the horrid direction it neither feels satisfying or exciting.

There was one scene that I unequivocally loved, though, and even if it did involve one of the slave girls getting topless on the beach, that wasn’t what captured my attention. Instead it was the bickering robot slaves, who Tisa had lured outside with her feminine wiles, strong enough to overcome a robot’s circuitry! One robot tries to convince the other to come back to the house with him, but the other robot is much too smitten to turn back now. It’s a great exchange that recalls something of a C-3PO & R2-D2 relationship, with a distinctly more low-brow sense of humor.

A movie like this isn’t so much about its quality as it is about entertainment, so the big question with Slave Girls from Beyond Infinity is whether it remains kinda fun throughout all the negative elements and missteps. Well… kinda. It’s got some moments of fun, but for the most part I’d call it a skipper and send it on a three-hour tour.

Next week on Full Moon Tuesday, I’m finally gonna check out Robot Wars! If it’s anything close to the level of awesome that Robot Jox was, I’m in for a treat!