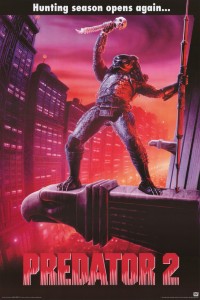 Roughly 10 years have passed since the events of Predator, and we find ourselves in a near future where cops drive around in Pontiac Trans Sport minivans and wage war against violent factions of drug-running criminals. Dropped right into the center of the hot conflict is the Predator, but this isn’t the noble hunter of the original. Nope, this fucker is all about style and panache. He immediately picks Glover out of the crowd and seems to target him as an ultimate goal. I guess Arnold’s victory proved to the Predator clans that humans could be more than simple prey. Anyway, this Predator has a shitload more weapons at his disposal, which again skewers that macho hunter vibe of the original, but plays into the reckless braggart character that seems to typify this particular Predator. He prefers massacre to a careful kill; why else would he assault a moving subway train full of people? To brag about it at the bar back home on Predator Planet, of course. We could also explain these additions and changes to the mythology with the “bigger budget” argument, but where’s the fun in that? 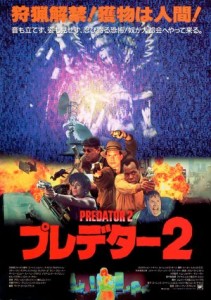 So the thing about Predator 2 to keep in mind is that it’s concerned solely with entertainment. You won’t get great characters and meaningful dialogue. It’s all about the action, and the action delivers over and over again. The film is filled with lots of wonderful Steadicam too, which helps to deliver the action to us in the most visceral way possible while also looking damn cool. Many of these Steadicam shots are very long takes, requiring a whole crowd of actors and extras to coordinate and fabricate a realistic crowd scene. It’s something that feels like a lost art these days where most of the background people would be digital multiplied.

There’s also many echoes to scenes in the original film which may or may not rub you the wrong way, depending on how uptight you are about the original. I was once that uptight guy, firmly believing that these moments were cheap and referential in a way that defamed the original, but I now see them for what they are: great fun. Writers Jim & John Thomas (who also wrote the original) play with the conventions they established, much to my enjoyment this time around. It feels like there’s not much to explore at the end of Predator (and really, there’s not), but the Thomas brothers found a great way to continue the franchise by transplanting the action into the city. Any film that once hinged on the “What is that thing?” mystery always has a tough time at creating a worthy sequel because, well, we know what that thing is already. Predator 2 goes a little more traditional action/horror, and because we’re all aware of what he’s capable of, it’s a lot of fun to watch the Predator outsmart the cops and eventually to see Glover hold his own against him. This Predator’s added abilities — and cockiness — are fun to discover, but our knowledge of the previously defined character traits inform nearly every scene to result in a very rich experience. I can’t really ask more from a sequel than that.

And if all that isn’t enough, you also get great moments like the Predator actually saying “Motherfucker,” or when Glover brakes Predator’s breathing mask and the Predator has to hold it up to his face and suck on it like an intergalactic Dennis Hopper from Blue Velvet. It’s so interesting to see how my perceptions of this one have changed: going from childhood love, to hate, and now back to the pure joy of childhood love. Predator 2 is a good thing, and it doesn’t deserve the bad rap it always seems to get. Oh, and I love Danny Glover.