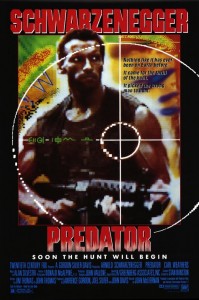 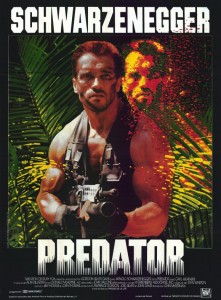 So after some very overt male bonding, we’re thrust into the mission at hand: Arnold and his men must drop behind enemy lines and rescue some high-profile hostages. No prob, we’ve got a crack team of kick-ass dudes on board this choppa! If anyone woulda said that two of these sons-of-bitches jammin’ to Long Tall Sally would one day become legitimate politicians, no one would have believed it. Anyway, very quickly after dropping into the jungle, their tracker Billy realizes that something is definitely not as they were told, and from here the action begins.

This time through I noticed how Predator was as much of a horror movie as it is an action movie. I’ve never really thought about it before, but Predator takes the simple “dudes with guns behind enemy lines” story, and augments it with the most badass alien stalking them in thermal vision. This takes what might be clichéd and “done before” to the next level and creates something unique. My girlfriend remarked right as the film was starting, “So is this like Alien?” And I replied that it wasn’t, but then I quickly took it back after some thought. It really is similar to Alien in a number of ways, but with the focus shifted to action instead of sheer terror.

It’s all the more impressive to consider that this was only John McTiernan’s second film. I’ve never seen his début — a horror film called Nomads starring Pierce Brosnan — but I’m sure it exhibits at least a hint of the quality contained in Predator. McTiernan would go on to make Die Hard the following year, thus firmly planting his name near the top of the action director debate for all time. While his later films don’t seem to have lived up to the legacy that those two did, like I said about Alan Silvestri before, after the flawless perfection of Predator and Die Hard, he could make a hundred shitty movies and it would never water down the intense adrenaline shot that those two movies provide. 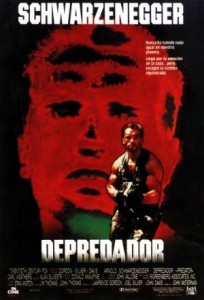 If somehow you haven’t seen the film and you’re still not sold, perhaps a description of two amazing, stunning montages illustrating the sheer willpower of testosterone will sway you. Hundred-foot trees are literally bent down to form weapons —

I just want to break in with a point that illustrates how much I love the score to this movie. If it’s readily available, I try to listen to a film’s score as I write the review as it quickly places me back in the head-space of the film and gives my brain something to groove on while I get all stream of consciousness. Anyway, I started the Predator score about a half hour ago and I only just now noticed that it has been repeating the first track the entire time. That’s how much I adore this score. I’ve listened to the same track for over 30 minutes straight, and even after discovering it, I just left it alone.

Anyway, the montages! The first one is definitely a highlight, but it’s nothing compared to the final montage as Arnold prepares to face off mano-a-alieno with the Predator. While everything Arnold does in it is badass, I especially love the cutaways to the Predator’s overconfident trophy gazing. The montage ends with Arnold announcing himself to the Predator by lighting a torch and roaring a roar to rival beasts that went extinct 65 million years ago. That’s about as pure as you can get your badass on cinema, folks; the search is over. Arnold then proceeds to fake the Predator out, making him blast away the jungle like a frustrated madman. I had never noticed it before, but this mirrors the scene when Bill Duke goes apeshit and takes out the jungle with the mini-gun; the Predator might be struttin’ like a boss, but he’s quaking on the inside.

There are a few logic holes in Predator, but I refuse to really acknowledge them or make any mention of what they are in my review. Logic holes are beside the point in a film as great as Predator, and I would hate to be the guy to ruin someone else’s Predator experience. You might not agree that this is four-star film, but I feel that a film is perfect when the sound, visuals and substance (either entertainment or art substance) all come together to create something that transcends time or genre. Predator fits that bill with ease for me, and that’s why in my book, it’s one of the few perfect films out there. I’m not saying it’s Grand Illusion or anything, but I am saying that there ought to be room at the top for genre films of this caliber. At Silver Emulsion there is, and Predator rips the spine out of most action hybrid films that came before or since. Do it. Do it now.