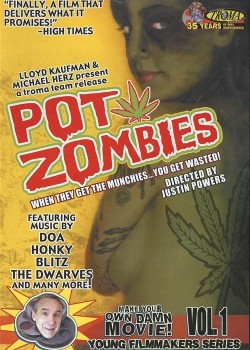 Expectations: Low. It can’t be anything great.

Likewise, unwary mainstream viewers that happen upon this one while browsing Comcast’s On Demand channels will need to be careful. If I say “independent, low-budget movie” and you think of Juno, this is not for you. If on the other hand, you’re a Troma fan and you are watching this one knowingly, Pot Zombies will provide a fair amount of entertainment. Don’t expect anything else from it, and it will deliver. I’m not saying it’s great, or even good, but it is watchable, and that’s something to be said for such a low-budget, obviously labor of love endeavor. 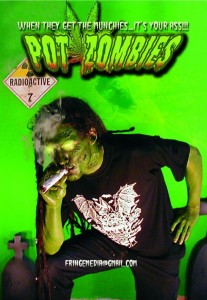 This is usually where I’d describe the plot, but with Pot Zombies there isn’t one. I don’t mean that there’s not much of one, or that it’s lacking in certain elements; there really isn’t a plot at all. Pot Zombies is merely a collection of short vignettes of people smoking pot and then inexplicably turning into zombies. There is a lengthy sequence early on that attempts to explain this phenomenon by showing people filling up a giant burlap sack next to a metal drum with a radioactive logo on it, but you can hardly call that a plot. Instead, think of Pot Zombies as more of a detached, “big picture” film that seeks to portray the pot zombie apocalypse as it affects the town, and not a group of characters as we’re accustomed to watching. In this way, it’s like a low-budget, zombie Contagion.

So with each vignette being a variation on a theme, they do have the tendency to be rather similar to each other, but the filmmakers actually did a pretty good job of making them stand out from one another. For instance, the classroom scene is memorable for the shot of the notebook with a metalhead’s bored drawings of the logo for his band, Scrotum of Defiance. A later scene becomes “that one with the body-hook dude that gets hung up by zombies,” and another scene features Lloyd Kaufman as a retarded pizza man. It’s all rather silly (which fits in perfectly with the standard Troma blend of gratuitous gore and fifth-grade comedy), but more jokes hit than I expected so I enjoyed it for the most part. 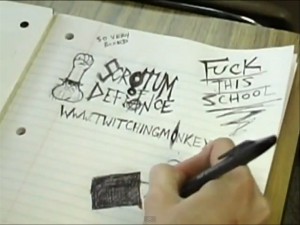 Speaking of gore, Pot Zombies does feature a lot of blood and what looks like raw liver, but not much of it looks very good. For the level of quality this film exhibits, it’s pretty damn good, but most of it is just a bunch of fat and beef liver stuffed inside someone’s shirt and then torn out by the rampaging zombie. The color of their blood is way too bright, though, so that bothered me more than anything, but the sheer amount of poorly colored blood pumping out of those hidden tubes was immense, so I could help but enjoy it. In Lloyd Kaufman’s excellent death scene (and a couple of other moments) there’s some CG blood added in that flies awkwardly out at the camera. It looks awful and I can’t understand why they’d add a couple of really shitty looking CG blood jets that nearly ruin an otherwise fun scene.

On the subject of bad CG, though, I’d be remiss not to mention the zombie’s eyes. See these are radioactive pot zombies so not only does their skin turn “Lou Ferrigno as the Incredible Hulk” green, it makes their eyes glow with a neon green hue. And that lovely neon green hue is added via the wonders of digital technology. And really, no matter how much I hate digital FX and I think they’re ruining film (even, and perhaps especially, low-budget ones), these CG eyes are HILARIOUS. Take everything you know about computer FX and throw it out the window. Now try to imagine computer FX if they were like handmade crafts you could buy on Etsy, and then have your completely computer illiterate Grandma animate them. They’re great! Seriously, those fucking CG eyes gave me more enjoyment than almost anything else in the film. 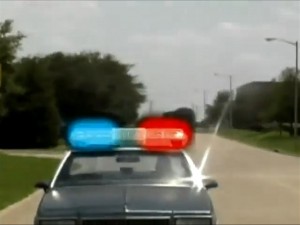 And when I say almost anything, I mean that the only thing I laughed at harder in Pot Zombies was the police cruiser. The police cruiser? What’s funny about that? Well, when the car they use is actually just a normal car and they add in the light rack and the flashing lights afterwards on the computer and it jumps all around, I defy you not to laugh at it. It’s a great moment of low-budget filmmaking ingenuity, making do with what you have, but goddamn is it awful looking and hilarious. I will say that in the screenshot here it looks pretty good, but you have to see it in motion to get the full, comedic effect.

The technical aspects of the film are well done for this level of filmmaking, but are not without some oddities. Many of the shots look like the director never even bothered to look at what he was filming, as many close-ups of characters cut off their eyes throughout the film. That’s something that I can buy happening once or twice, and I can understand having to use what you got because you don’t have the luxury of re-shoots, but over half of the fucking close-ups suffer from this. Jesus Christ. Thankfully, every time I’d really get annoyed at this, the scene would move into the “zombies eating the person” section, and those were always adequately filmed.

I don’t recommend Pot Zombies to anyone but stalwart Troma fans, as all others won’t be able to wrap their heads around what they’re experiencing. Even with this tempered recommendation, the film is still a little overlong and it’s only 55 minutes! I’m just glad that these filmmakers don’t take themselves too seriously and only made the amount of movie they had, instead of padding the runtime with boring shit to achieve a traditional feature length. So while other reviews might bitch about the length, I’m glad it’s only 55 minutes. The Tree of Life was 139! I wish that shit was only 55 minutes!

The whole movie! For Free on Youtube! Troma is awesome!