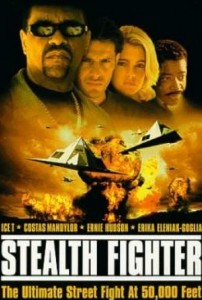 Now as I mentioned before, Ice T doesn’t get nearly enough screen time in his own film. A lot of this can be explained away with the “assembly of stock footage” aspect of the film, but even then it’s no excuse to have Ice T on-board and then underuse him. But here’s the thing about Stealth Fighter: just when you think that everything is going according to plan and Ice T will continue playing second fiddle to Andrew Divoff’s Latino terrorist, Ice pops a cap in the motherfucker while he’s on a vid-call to the president and literally takes over the airwaves. What follows is one of the greatest monologues I could have ever hoped for, and someone had the sense to make a YouTube video of it!

Now that’s how you tell the president to give you some goddamn money! I love it, and that moment made the fact that the rest of the movie was somewhat Ice-light a lot more bearable. At times I was wishing that the lead roles had been reversed with Ice T in the hero role, and Costas Mandylor as the stealth-fighter stealin’ criminal, but this monologue proves exactly why you have Ice T in that role. While a role switch would have allowed Ice to participate in a fun nighttime ground raid on an enemy encampment instead of watching from the villa with a pair of binoculars, it would also mean that the monologue wouldn’t be there and we can’t have that, now can we? I should also mention that the nighttime raid I mentioned kicks off the action with not one, not two, but four bazookas being fired indiscriminately into the camp, so even without Ice leading the charge, any true action fan cannot deny the simple pleasure contained in the scene.

Ice’s acting in Stealth Fighter is a bit hit or miss in spots, with dialogue sometimes running together and hard to make out. This might be from Wynorski’s quick shooting style more than Ice’s lack of acting chops, as Ice clearly proves during the monologue that he can throw down when it counts. Perhaps it’s just that this was the first time he said more than a few lines in a scene. In any case, he brightens any scene he’s in, whether his line delivery is hard to make out or not. I’m a fan, so I’m obviously excited to see him, but he definitely has an energy about him that sets him apart from most of the other actors.

As a sidenote, I’d just like to mention that seeing Ice T in a pilot’s jumpsuit, coupled with the presence of Ernie Hudson, made me imagine a new Ghostbusters film with Ice T, Ice Cube, Ernie Hudson and Don Cheadle in the lead roles taking out spooks and specters in grand style. I’m not one for remakes or re-imaginings of my favorite films, but I’d be willing to bet that a film boasting that cast could deliver something truly outstanding.

Stealth Fighter is a B-movie through and through, comprised more of stock footage than actual scenes shot for the movie, but the resulting product is one of the most enjoyable low-budget action films I’ve seen in a while. OH SHIT! I can’t believe I got all the way through writing this review without mentioning the climactic martial arts/dogfight battle that ends the film! It’s incredible! See Ice T wave his hands with no style or grace! Watch as Costas Mandylor gets clocked in the face with a hammer! Cringe in fear as they take their struggle to the air when Ice jumps into the F-117 and Mandylor slides into the F-15 that just appeared out of thin air! Make no mistake, Stealth Fighter fires off hot-shit action like James Brown consistently pumped out dope grooves. Experience how stock footage from no less than 14 movies can come together to form one super movie of epic proportions. This might have come out in 1999, but it treats its characters and its action like it’s 1989, so any fan of ’80s action should definitely check this one out.