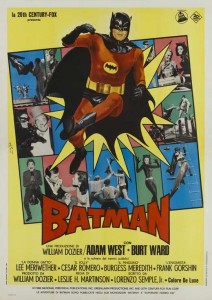 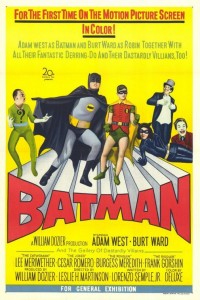 Batman is definitely a fun movie if you like this sort of thing, but I’m at something of a loss trying to review this film as normal because this version of Batman is anything but normal. It’s not the kind of flick you can simply sit down and critique. That would be missing the point. Instead I’ll just go through some random observations I had while watching; for every random action, there is an equal and opposite random reaction, if you will.

As Batman was made in 1966, and its lineage is firmly rooted in television, the film reminds me to a great degree of the original Star Trek. From Adam West’s Shatner-esque line delivery to the well-made, colorful sets, it’s a superhero, camp-focused Star Trek. And consequentially I am also reminded of the very early Shaw Brothers films, as they, having also arrived in the same period, have always reminded me in ways of the original Star Trek. But Batman’s fight on the “open sea” in front of a giant, blue-sky matte painting with obvious ripples and imperfections seals the Shaw Brothers connection. Shaw Studios always had some glaring evidence that their sets were sets, and the sky was usually the most obvious. And just because we’re being reminded of things in this paragraph, I’ll also say that the huge matte painting will also make you think of The Truman Show.

The film’s style and tone also seem to be directly referencing and playing off of James Bond’s established tropes. Some of these are also Batman’s tropes, but at the time this was made I feel that James Bond was more firmly rooted in the American movie-going psyche, and we all know that the James bond films hammer home those same tropes again and again. So when an obviously suspicious, but very beautiful Russian girl approaches Bruce Wayne mid-press conference, we all pretty much know she’s not to be trusted… except Bruce, of course. 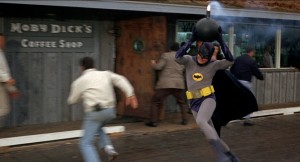 Batman is filled with lots of ridiculous dialogue as well, and my favorite of these moments was when Batman received a riddle from The Riddler and read it off to Robin, asking for his input. I don’t remember the riddle, but Robin’s answer was, “A ball-point banana?” and I laughed myself silly. The WTF level is quite high in Batman, but never more than the duo’s narrow escapes from imminent danger. Torpedo headed straight for Batman and Robin who have no way to stop it and no way to evacuate the area? Cut to: Batman and Robin driving away in the Bat-Boat. Huh? Oh wait, Batman says a porpoise jumped out in front of torpedo and saved their lives. What the fuck? If you’re OK with ridiculous moments like this, and believe me there are many, then you should fully enjoy Batman.

The film is very well-shot for what it is, although it does feel like a really long episode instead of a true movie. It’s been a long time since I’ve watched the show, but it seemed like it the film featured the same shooting style and visual aesthetics that I remember, and the sets for the main locations were definitely the same. This film was made in between the first and second seasons of the show, so it all adds up. I did enjoy that all the villain’s lair scenes were shot entirely with dutch angles to give them the more ominous, evil feel that the angles provide.

As long as you know what you’re in for, Batman is good fun. I was a huge fan of the show growing up, but somehow I never saw the film. Watching it brought back a lot of memories of sitting on the floor and watching Batman punch evildoers in the face with a giant POW! blasting onto the screen. It still makes me smile and I really enjoyed watching Batman. It’s super loud, and can be exhausting at times with the sheer amount of shit packed into this film, but it’s fun and that’s really all they set out to achieve with this one.